STONY BROOK, NY, February 16, 2021— According to Dental Products Reports, about 60 percent of people have anxiety about going to the dentist. But who can have anxiety when your dentist grooves like this? No one, that’s who. 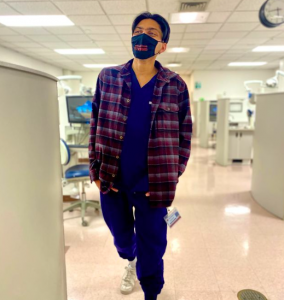 Varun Goyal, a third-year student at Stony Brook University’s School of Dental Medicine, was always passionate about dancing. It was his way to decompress and let his creativity flow, he says. He was also always sure he wanted to work in the medical field, however, he wasn’t sure if he was ever going to be able to bring his second love — dance — into the mix.

“I always wanted to be a part of the healthcare community because it would allow me to grow as a person while making a change in someone else’s life. When I got into dental school, I told myself I wouldn’t stop dancing, but I never thought I would find a way to integrate the two,” he says.

During his first year of dental school, Goyal also had the opportunity to dance with K-Pop group BTS, while still completing his studies. However, there was still seemingly no way to integrate the two. Content to let each part of his life stand alone, it was a moment of inspiration sparked during the COVID-19 Pandemic that changed things for him.

Inspired by Drake’s “Toosie Slide,” Goyal noticed “toosie” could easily be replaced by variants of the word “tooth.” From there, he says, he could no longer stop thinking about how to integrate dental lingo into other songs. Now, Goyal combines his love for dance with his future career in dentistry for the world to see by creating amazing, high-energy videos to well-known pop hits that include ties to his sector of the oral health field.

“Being able to do both dance and dentistry is so fulfilling,” says Goyal.

Goyal’s premiere video can be viewed here. Or you can check out his Instagram page for more of his videos.