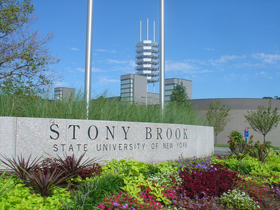 Stony Brook is ranked 92nd among national universities which the magazine defines as universities that “are typically large institutions that focus on research and grant bachelor’s, master’s, and doctoral degrees.” Stony Brook also ranked 40th in the category of “Top Public Schools among National Universities” which is a category consisting of doctoral granting institutions. These new rankings represent the highest rankings awarded to Stony Brook by US News in each respective category.

“It is terrific to see Stony Brook ranked among the top 100 National Universities and the top 40 Public National Universities in the United States,” said Stony Brook President Samuel L. Stanley Jr., M.D. “Stony Brook strives to provide a world class education at an affordable price in fields that offer strong career opportunities for our students, and in a way, this quantifies our efforts which is gratifying. It is a testament to the hard work and dedicated efforts of our faculty and staff and I applaud them for this achievement.”

“We are delighted to see so many SUNY schools ranked among the nation’s “Best Colleges” by U.S. News & World Report again this year,” said SUNY Chancellor Nancy L. Zimpher. “In New York, Governor Cuomo and our public colleges have worked very hard to provide an education of the highest quality that is both affordable and accessible. Today’s rankings are a testament to our success and to the outstanding quality of our campuses throughout New York State.”

Stony Brook’s class of 2011 ranked 47th for students graduating with the least amount of debt, breaking the top 50 for the first time in that category. It ranks 39th in ethnic diversity and 79th among National Universities in the category of Freshmen Retention Rate. Stony Brook’s Engineering program was also selected as one of the nation’s best, ranking in a tie for 75th for universities whose highest degree offered is a doctorate.

Part of the State University of New York system, Stony Brook University encompasses 200 buildings on 1,450 acres. Since welcoming its first incoming class in 1957, the University has grown tremendously, now with 24,100 students and 2,200 faculty. Its membership in the prestigious Association of American Universities (AAU) places Stony Brook among the top 63 research institutions in North America and Stony Brook ranked 78th in the “Times Higher Education World University Rankings.” One of four University Center campuses in the SUNY system, Stony Brook University co-manages Brookhaven National Laboratory, placing it in an elite group of universities that run federal research and development laboratories. As the largest single-site employer on Long Island, Stony Brook is a driving force of the regional economy, with an annual economic impact of $4.65 billion, generating nearly 60,000 jobs, and accounts for nearly 4 percent of all economic activity in Nassau and Suffolk counties, and roughly 7.5 percent of total jobs in Suffolk County.