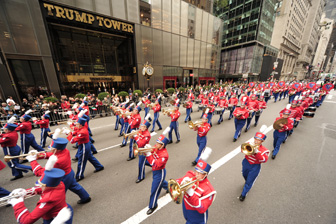 Coaches and players from the Stony Brook Baseball Team joined the band in the parade to celebrate their “Shock the World” run to the 2012 College World Series on a special float generously provided by the Columbus Citizens Foundation.

The best mascot in all of college sports, Wolfie, a crowd favorite, was outfitted with a GoPro Camera, allowing ABC to cut live into the broadcast to glimpse first ‘person’ views of marchers and parade onlookers.

The Columbus Day Parade is sponsored by the Columbus Citizens Foundation, a cultural and philanthropic organization deeply committed to education. They are currently providing approximately two million dollars annually to more than 600 deserving students who have the capacity, but not the means to secure a first-rate education.

“The invitation to perform in the historic New York City Columbus Day Parade marks yet another milestone in a string of recent accomplishments by the Spirit of Stony Brook and speaks to the wonderful talent, commitment, hard work and enthusiasm of our students and staff,” said Jeffrey A. Barnett, Assistant Dean of Students, who oversees the Office of Athletic Bands. “Our students and their families are thrilled to be back.”

“This band first performed together just six years ago in 2006,” said Dr. Jerrold L. Stein, Associate Vice President for Student Affairs and Dean of Students. “To be invited to perform at one of the marquee parades in the biggest city in the world and to have accomplished all that they have in this short time – is a remarkable achievement.”

talented student musicians drawn from across the country and around the world. The band consists of several ensembles including a marching band, pep band, color guard and drum-line. In just a short time, the athletic band program has entrenched itself in the hearts of the Stony Brook and local communities. The Spirit of Stony Brook is just one of five collegiate marching bands in the State of New York and the only one on Long Island. They have appeared on a New York State Lottery Powerball commercial, ABC’s Extreme Makeover Home Edition, performed at the Nassau Coliseum, the New York State Capitol Building, and in some of America’s most historic cities.

About the Columbus Day Parade

The parade is organized and supported by the Columbus Citizens Foundation and celebrates the spirit of exploration and courage that inspired Christopher Columbus’s 1492 expedition and the important contributions Italian-Americans have made to the United States. More than a dozen high school bands, as well as virtuosi professional groups from the United States and Italy, march up Fifth Avenue and filled the canyons of midtown with joyous, heart-pounding music. Traditional folk groups perform centuries-old dances, and cutting-edge designs are brought to the parade route in displays of the vibrant culture that is Italy today. The Columbus Day Parade is a fun filled Parade that gets bigger and better every year. Participants from all over the world march in the Parade with pride. The Columbus Day Parade has become a globally televised event with millions of viewers and more than a half million spectators on the streets. The parade route runs on Fifth Avenue from 44th – 72nd Streets. The Grandstands are located on Fifth Avenue between 67th and 69th Streets.