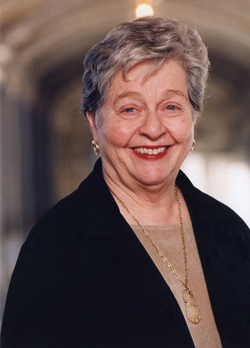 STONY BROOK, NY, February 4, 2009 – Proclaiming the achievement “a sterling affirmation” of the importance of public higher education in America, Stony Brook University President Dr. Shirley Strum Kenny announced today that the University has surpassed its goal of $300 million in its first-ever capital campaign, “The Emergence of Stony Brook.”  The seven-year campaign, the largest ever of any campus of the State University of New York (SUNY) system, has achieved gifts and pledges totaling more than $312 million, with six months to go.  The campaign will continue through June 30, 2009, the end of the University’s fiscal year and also the effective date of Dr. Kenny’s retirement, following 15 years as Stony Brook’s third president.


“This is a historic milestone, for Stony Brook University and for SUNY,” Dr. Kenny said.  “And during  these harsh economic times, which have led to severe cuts in government support, this achievement is a sterling affirmation of both the centrality of public higher education to the future of our state and nation, and to Stony Brook’s position as a world leader.”

Donors to the campaign have set several new records for Stony Brook and for SUNY.  Drs. Jim and Marilyn Simons and the Simons Foundation have become the first $100 million dollar donor.  A new pledge of $17 million augments a $60 million commitment announced last year to construct and endow the new Simons Center for Geometry and Physics.  The latest pledge, combined with earlier gifts, brings their total giving to more than $106 million.

“Jim and Marilyn are just extraordinary,” said Dr. Kenny.  “Their previous commitments during the campaign have twice made news and raised the bar for philanthropic support of public higher education in New York State.  Now, with their giving exceeding $100 million, they are making an unprecedented impact on the University and its position as a flagship of the SUNY system.”

In addition to the gift for the Simons Center, the campaign set a record when it accepted and dedicated the Charles B. Wang Center, which celebrates Asian and American cultures.  The 120,000-square-foot building was officially presented to the University by Mr. Wang in Oct.  2002.  At $52 million, it is the largest single non-cash gift ever received by a SUNY campus.

“The dramatic Wang Center has quickly become a campus architectural icon, anchoring a transformed campus,” said Dr. Kenny, noting that it is used for conferences, art exhibits, film festivals, lectures, seminars, and performances. It is open to all Stony Brook students, faculty, staff, and alumni, as well as the surrounding community.

Most recently (in December), the campaign was buoyed by a $10 million gift from Drs. Henry and Marsha Laufer, both former faculty members.  The majority of the gift, $8 million, will be used to establish a new interdisciplinary research center bringing together experts in such fields as math, genetics, biochemistry, engineering, and computer sciences to achieve breakthroughs in biomedical research and health care.  In addition to endowing the Louis and Beatrice Laufer Center for Computational Biology and Genome Sciences, named for Dr. Laufer’s parents, the gift will fund three endowed faculty positions, including two endowed professorships and an endowed chair, which will be held by the Center’s director.  The remaining $2 million was designated to support programming at the University’s Staller Center for the Arts and scholarships in the School of Health Technology and Management.

“The success of this campaign is a testament to the exceptional quality of our University, its faculty and students, and its significant impact on the lives of countless individuals,” said Richard L. Gelfond, CEO of IMAX Corporation and Chair of the Stony Brook Foundation Board of Trustees.

He added that, “Stony Brook University is inextricably linked to the educational, economic, cultural, and social fabric of New York State, and Long Island, in particular.  The University has been the recipient of record-breaking gifts during this campaign because our donors understand this.  Their gifts are an investment in not only the future of Stony Brook but our collective future.  There is no smarter place to invest than in public higher education, and Stony Brook is an institution of remarkable stature worthy of such philanthropic investment.  Thanks to the generosity of our friends and alumni, Stony Brook will continue its remarkable trajectory.  I’m extremely proud to be an alumnus of this institution.”

To date, the campaign boasts more than 237,000 gifts from more than 54,000 donors.  Approximately one out of five alumni has made a gift to the campaign.  To date, the campaign has added more than $71 million in new gifts to the endowment of the Stony Brook Foundation, the separately governed 501(c)(3) charitable foundation which accepts and manages private gifts and grants for the University’s benefit. Most gifts have been designated by the donor for a particular purpose such as scholarships or research.  Only $2.2 million (0.7%) of the campaign total to date has been given without any restriction.

“The campaign has certainly lived up to its name, The Emergence of Stony Brook,” commented Lance King, the University’s Vice President for Advancement and President of the Stony Brook Foundation. “Thanks to unprecedented levels of giving from our alumni and friends and under Dr. Kenny’s leadership, the University has made tremendous strides in quality and reputation during the course of the campaign.  Those improvements have garnered national and international attention. Stony Brook has indeed ‘emerged,’ and we have many people to thank for helping us to do so,” King added.


Part of the State University of New York system, Stony Brook University encompasses 200 buildings on 1,600 acres. In the 50 years since its founding, the University has grown tremendously, now with nearly 24,000 students and 2,100 faculty, and is recognized as one of the nation’s important centers of learning and scholarship. It is a member of the prestigious Association of American Universities, and ranks among the top 100 national universities in America and among the top 50 public national universities in the country according to the 2008 U.S. News & World Report survey. Considered one of the “flagship” campuses in the SUNY system, Stony Brook University is a driving force of the Long Island economy, with an annual economic impact of $4.65 billion, generating nearly 60,000 jobs. Stony Brook accounts for nearly 4% of all economic activity in Nassau and Suffolk counties, and roughly 7.5 percent of total jobs in Suffolk County –