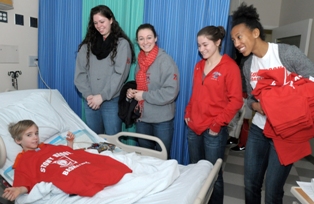 
STONY BROOK, N.Y., February 26, 2013 – Fresh from a hard-fought win over Maine on Saturday, the Stony Brook University women’s basketball team put victories on the basketball court into perspective on Monday with a visit to hospitalized children at Stony Brook Long Island Children’s Hospital.

Team members and coaches distributed “6th man” T-shirts and team posters to children, along with stuffed animals and toys. Brayden Bello, age 6, of Commack, son of Kerry and Jaime Bellow of Commack and a first grader at Indian Hollow Elementary School, received a Lego toy and T-shirt as the team gathered around his hospital bed. His mother spoke on behalf of the shy youngster, saying, “It’s nice that they do that.”

The players got as much out of the interaction, if not more, than the children did. “I really enjoyed it,” said Natalie Myers, a sophomore point guard from Portland, Ore., who is majoring in business administration. “It’s nice to see the sparkle in their eyes. They have such a really great attitude too.”

“I like it a lot,” added Teasha Harris, a junior point guard from Bloomington, Il., who is majoring in sociology. “You see what the kids like to do in their free time. It’s really exciting. It makes you realize what you take for granted, like the littlest things.”

The team also stopped at the Stony Brook University Cancer Center, where they visited with pediatric outpatients, including Justine Ellis, 17, daughter of Dave and Leslie Ellis of Manorville. A senior at Eastport-South Manor High School, Justine plays basketball, volleyball, soccer and softball recreationally and is applying to Stony Brook University for next fall. “It was fun,” she said of the opportunity to meet the members of the Stony Brook team.

Meghann Bohle of Port Jefferson, mother of 2-year-old Landon Bohle, said her son was nonplussed when he heard the team was coming to visit him at the Cancer Center, where he also is an outpatient. But he soon warmed up to the players while his mom watched nearby.

Meghann played volleyball and basketball in high school, she said, while his dad, Greg Bohle, played lacrosse and soccer. “We’re big basketball fans,” Meghann said. “Hopefully, he (Landon) has got sports in his future.”

“We appreciated the chance to give back to the community,” said Beth O’Boyle, Head coach of the Stony Brook women’s basketball team, after the visit. “The Stony Brook Long Island Children’s Hospital does an exceptional job caring for its patients and we enjoyed our time visiting with the children, their families and the dedicated staff at the hospital.”