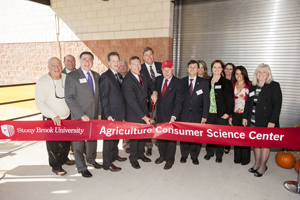 Officials celebrate the grand opening of the Agriculture Consumer Science Center at the Calverton Incubator. Please see below for full caption.

The ACSC, an 8,300-square-foot annex to the Calverton Incubator, will provide regional food and wine producers and local entrepreneurs access to shared processing areas. It also facilitates contact with collaborating researchers, scientists and professionals from Stony Brook University, Brookhaven National Laboratory and the NYS Small Business Development Center, all of which can guide and advise from a business concept all the way to commercialization.

In March 2010, Stony Brook announced that through the efforts of New York State Senator Kenneth P. LaValle, the University was selected to receive a $3.5 million grant from the New York State Economic Development Assistance Program (NYS EDAP) for the construction of the ACSC with a focus on the development of aquaculture, agriculture and environmental technologies. Funding for the project was administered by the Dormitory Authority of the State of New York (DASNY). In his remarks, Dr. Stanley expressed gratitude to Senator LaValle for his efforts in securing the $3.5 million for construction, and to the Town of Riverhead for donating the 50 acres of land on which the ACSC is built.

“Economic Development is a key component of the Stony Brook University mission and critical to the growth and success of Long Island’s economy,” said President Stanley. “Now that the Center is officially open for business, the University has taken the first steps to bridge the gap between the East End and the market shelf.”

The new facility houses fully functional resources for agricultural producers and small scale food processors in both hot process and dry process functions. Dry storage, cold storage, and freezer storage units are available on site, as well as a product development area with a viewing section for demonstration purposes. Producers will also be afforded laboratory space with ductless fume hoods and a microbiology lab for research and development. A loading dock will serve both the new addition and the existing building. Ten users of the ACSC have been approved to date.

“The ACSC will help local farmers and businesses contribute to local job creation and help to bring the next great product to market, all right here in Riverhead,” said Senator LaValle.

Janet Jensen, a soon-to-be ACSC tenant and founder of N.O.A. Bars, a start-up company that produces all-natural snack bars, expressed her appreciation for the assistance of the Agriculture Consumer Science Center. “This brand new facility has beautiful state-of-the-art equipment, as well as business planning and all the guidance a person will need to get the best possible start to having a successful business,” Jensen said. “I am certain that many others will also benefit from the opportunities presented by this fine facility.”

Another future tenant, Rebecca Castellano, founder of Rachel Lu, a start-up that seeks to produce high-quality gluten-free food agreed, “Anyone in the food business understands that it works on a volume basis,” she said. “Profit margins are tight, so it’s imperative that at some point you work to deliver high volume. The Agriculture Consumer Science Center gives us everything we need to grow our company – storage, shipping and loading docks, gluten-free cooking areas, and a complete manufacturing infrastructure, including education and operational support.”

“The impressive response of the agricultural community, even before the doors are open, proves this new facility is answering a deeply felt need,” said Yacov Shamash, Vice President for Economic Development and Dean of the College of Engineering and Applied Sciences at Stony Brook University. “We’re delighted to help sustain an industry, which has been a Long Island mainstay for more than 350 years, in the new world of the 21st century.”

Monique Gablenz, Director of the SBU Incubator at Calverton, noted that training and community education services are also available for tenants. One such organization providing resources is J. Kings Food Distributors, which has developed a program designed to help local independent food businesses get the training needed to raise awareness and expand their knowledge base on issues such as food product development, marketing, pricing and distribution related issues.

“Through this new Agriculture Consumer Science Center, Stony Brook University has found a new way to plant seeds on the East End that will grow into new businesses and jobs on Long Island,” said President Stanley.


The Calverton Incubator was conceived as an economic engine to enhance Eastern Long Island’s agricultural, aquaculture and environmental industries. As one of Stony Brook’s three business incubators, Calverton is helping create and sustain a new base of industry and jobs by promoting the growth of tenant companies and supporting regional businesses here on Eastern Long Island. The Calverton Business Incubator is owned and operated by Stony Brook University. The Calverton facility includes offices, conference rooms, and laboratories with both fresh and salt-water access. The Incubator supports entrepreneurial companies by providing access to resources and strategies for a period of three to five years in an effort to foster the research and development of products and/or services for introduction into the marketplace.


About the Long Island Agricultural Industry

The agricultural industry represents five percent of the Long Island economy, provides 6,000 – 8,000 jobs to the local economy, boasts an annual gross income of $250 million, and produces 500,000 cases of wine annually. In Suffolk County, 33,000 acres are currently utilized for agricultural production of which 15,000 acres have been preserved for farming through the commitment of public funds by the governments of the towns, Suffolk County and State of New York – evidencing the strong commitment to sustain agricultural production as an industry on Long Island. However, the ever-increasing cost of farming and regulatory constraints necessitates farmers to come up with strategies to remain economically viable. The development of value added products to their agricultural commodities is one such strategy. Unfortunately, the cost of the execution of the many food science details in the development of a value added product line and the processing of the products in a sanitary, licensed environment is prohibitive for any single agricultural entrepreneur.