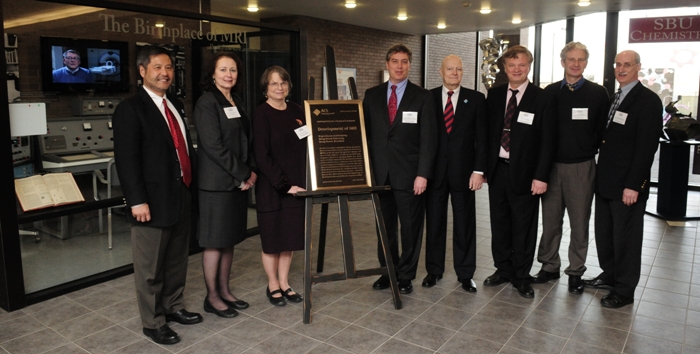 “Everyone at Stony Brook is extremely proud of Dr. Lauterbur and his contribution to science and humanity,” said University President Samuel L. Stanley Jr., MD. “The designation of our Chemistry Department as a National Historic Chemical Landmark by the American Chemical Society is a wonderful tribute to this great man and to our University.”

The designation ceremony and unveiling of the plaque took place in the Chemistry Building lobby, followed by a symposium, “The Future of Bioimaging,” in the Charles B. Wang Center Theater.

Joan Dawson, PhD, Professor Emerita, University of Illinois at Urbana-Champaign, and Lauterbur’s widow was among the guest speakers at the ceremony. She spoke of the “Eureka” moment Lauterbur experienced on September 2, 1971, while taking his second bite from a hamburger at a local restaurant where he was eating with his friend and colleague Don Vickers of NMR Specialties.

“He ran out of the restaurant to get a spiral bound notebook to write it up, and Don countersigned it the next morning,” said Dawson of her husband’s handwritten notes that she projected on a screen at the event – notes which eventually led to the 1973 paper in the journal Nature, announcing that he had generated multidimensional images of macroscopic objects.

“My husband has been awarded many honors over the years and this would be a very special one because he felt very fondly of this department,” Dawson said after the ceremony. “I’m very proud of my husband and that there can be days like this and that there are students here to whom he can continue to be a role model,” she said of the historic landmark designation.

Also in attendance were two of Lauterbur’s students, Dr. Jerome Ackerman, now at the Harvard School of Medicine, who was a guest lecturer at the symposium following the dedication, and Joseph A. Frank, Ph.D., of the National Institutes of Health, who were extensively involved in Dr. Lauterbur’s work while at Stony Brook University.

The ability to perform non-invasive imaging of the interior of living organisms using NMR is one of the most important medical discoveries of the 20th century. The instrument on which Lauterbur performed this critical experiment was a Varian A-60 NMR spectrometer capable of detecting protons at 60 MHz. That very same instrument is in a permanent display in the lobby of the Chemistry Building. Millions of lives have been saved thanks to Magnetic Resonance Imaging (MRI), which permits early detection of severe conditions such as multiple sclerosis, and cancer.

“Paul Lauterbur’s invention of MRI has transformed diagnostic medicine by providing a tool for the non-invasive, in vivo examination of soft tissues such as the heart, brain, and muscles and for the early detection of cancer and other diseases,” said ACS President Nancy B. Jackson. “It was the genius of Paul Lauterbur to realize that nuclear magnetic resonance signals could generate multidimensional images.”

On behalf of the ACS, Jackson presented a plaque honoring the invention of MRI to Stony Brook’s Vice President for Research, John H. Marburger, III. Marburger served as Science Advisor and Director of the Office of Science and Technology Policy to President George W. Bush and was also President of Stony Brook University (1980-1994).

“Paul Lauterbur’s path-breaking work on magnetic resonance imaging has always been a source of pride for Stony Brook University,” said Marburger. “Now the American Chemical Society’s declaration of this work as a National Historic Chemical Landmark raises the visibility of this achievement in a broader community. Most people know that MRI is a powerful medical diagnostic tool, but few stop to think how it came into existence. The landmark designation gives us an opportunity to tell the story of chemistry in action and encourages us to tell it in new ways to wider audiences. We are proud to be the birthplace of this remarkable technology and are grateful to ACS for granting it landmark status.”

Lauterbur began his work at Stony Brook in the early 1970’s by researching applications of nuclear magnetic resonance (NMR) imaging, an indispensible tool for chemical analysis. Lauterbur’s great achievement was to use the spatial information contained in NMR signals to make three-dimensional pictures. This led to a 1973 paper in Nature magazine announcing that he had generated multidimensional images of macroscopic objects. “A possible application of considerable interest…would be the in vivo study of malignant tumors,” he observed.

Lauterbur’s research was advanced by the British physicist Sir Peter Mansfield , Emeritus Professor of Physics at the University of Nottingham. The two shared the 2003 Nobel Prize in Physiology or Medicine for their discoveries concerning magnetic resonance imaging.