From GED to Fulbright Scholar 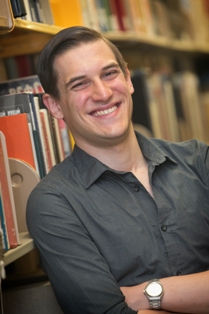 From GED to Fulbright Scholar

STONY BROOK, NY, May 23, 2013 – Stony Brook University undergraduate student Samuel Katz (’13) has been awarded a Fulbright U.S. Student Program scholarship to conduct biomedical research at the Berlin Institute for Medical Systems Biology (BIMSB) in Germany, announced the United States Department of State and the J. William Fulbright Foreign Scholarship Board. Katz is one of approximately 1,800 chosen worldwide for this prestigious honor from all fields of study and the only one from Stony Brook University for 2013.

Katz, 23, a senior biochemistry major from Brooklyn, NY, began studying at Stony Brook in the fall semester of 2008. Before that he spent two years at the Slabodka Yeshiva in Israel from 2006-2008. Deciding to pursue an education apart from his orthodox roots, he returned to New York and earned his GED at The Door in Manhattan in June of 2008.

“As a Fulbright student, Sam will be part of a community of scholars that are making important contributions to the world,” said Stony Brook University President Samuel L. Stanley Jr., MD. “Becoming part of that community and representing the United States abroad is a great privilege. On behalf of Stony Brook University, I congratulate Sam on this wonderful accomplishment.”

Katz’s Fulbright project at BIMSB entitled, “Identification and Characterization of Skin Cell Inducer and Associated Regulatory Factors,” will focus on “Direct Reprogramming,” a novel approach to looking at ways to convert a mature cell into another without making the cell behave like a stem cell first.

“I’ll be looking at what makes a skin cell become a skin cell, and more importantly, what makes a mature skin cell not respond (or become refractory) to becoming a different cell,” said Katz. “I will try to determine if the cell can be manipulated so that under controlled conditions we can get a mature cell to respond to these factors and become a different cell. This can be very useful for the development of cellular replacement therapies for patients suffering from degenerative diseases such as Parkinson’s, Alzheimer’s and Muscular Dystrophy.”

During his time at Stony Brook University, Katz was a 2011 finalist in the Stony Brook Student-Faculty Playwriting Competition for his short play, American Muse, which received a staged reading in the Staller Center for the Arts. In the spring of 2012, he worked with Steve Marsh, Lecturer and Director of Graduate Studies in the Department of Theatre Arts at Stony Brook, on the production of
QED
, a play about the scientist Richard P. Feynman performed at the Simons Center for Geometry and Physics. For the play, Samuel designed the scientific equations of the blackboards on the set, taught the actors how to draw believable scientific figures and gave the actors the scientific background behind the dialogue of the play. He also spent two years writing for the Stony Brook Press and one semester as a member of the crew team.

In the summer of 2012, Katz received a National Institutes of Health (NIH) Fellowship to conduct research at the University of Michigan through their Summer Undergraduate Research in Physiology program. He worked in the Moore Lab studying the ability of the immune system to clear bacterial infections from the lung after receiving a bone marrow transplant. The work he participated in was published in the Journal of Immunology this past April.

“Winning the Fulbright is a testament to all the support I’ve received over the last four years from professors, mentors, friends and family,” said Katz. “What I love about science is how much of a shared experience it is. I always wanted to work with an institution abroad as the scientific community defies borders; and I’ve long wanted to explore Berlin, a very modern city that’s teeming with new art and new architecture. This award will give me the chance to do both.”

After the Fulbright Scholarship ends, Katz plans on applying to PhD programs to study virology and immunology. He believes that being part of the Fulbright community and meeting people from diverse fields will help inspire him to write a science book, similar to those that first introduced him to and instilled in him a love of science.


About the Fulbright U.S. Student Program

The United States Department of State’s Bureau of Educational and Cultural Affairs (ECA) administers the Fulbright Program under policy guidelines established by the J. William Fulbright Foreign Scholarship Board (FFSB) and in cooperation with bi-national Fulbright Commissions and the Public Affairs Sections of U.S. Embassies abroad. The Fulbright Program has provided more than 318,000 U.S. and international participants, chosen for their leadership potential, with the opportunity to observe one another’s political, economic and cultural institutions, exchange ideas, and embark on joint ventures of importance to the general welfare of the world’s inhabitants. Approximately 6000 grants were awarded in 2012, at a cost of more than $326.8 million, to U.S. students, teachers, professionals, and scholars to study, teach, lecture, and conduct research in more than 155 countries, and to their foreign counterparts to engage in similar activities in the United States.