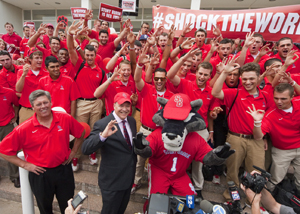 Stony Brook Seawolves baseball “Shocked the World” and became the darling of the sports world with their deep run into the NCAA College World Series.

1) Seawolves Baseball Program “Shocks the World” by Advancing to College World Series (June) – The Stony Brook University baseball team became the story of the sports world when it defeated six-time national champion LSU at home in a best-two-out-of-three NCAA Super Regional to advance to the College World Series. Embraced by the city of Omaha as their team for the tournament, the Seawolves finished the year with a school-record 52 wins and a number 7 national ranking. Matt Senk was named the National Coach of the Year, and Travis Jankowski was National Co-Player of the Year.

2) Simons Foundation Matching Gift Challenge Grant inspired an unprecedented level of philanthropic giving to Stony Brook University in 2012 including: a $10 million anonymous donation which led to a $20 million impact to establish a world-class institute for Advanced Computational Science; a $2.5 million gift with a $5 million impact to advance research and clinical care at the newly named Lourie Center for Pediatric Multiple Sclerosis at Stony Brook Long Island Children’s Hospital; a $1.5 million gift resulted in an impact of $3 million for the Shinnecock Bay Restoration Program on the Stony Brook Southampton Campus; a $1 million gift with a $2 million impact to create an Endowed Chair in Immunology; a $500,000 pledge, matched from Christopher Pendergast and the Ride for Life organization for an impact of $1 million to help support the development of an ALS Clinical Trials Program at Stony Brook University’s ALS Center of Excellence ($1 million impact); and many more.

5) Stony Brook Faculty Elected to prestigious scientific organizations in 2012 – In April, Eckard Wimmer, PhD, was elected to the National Academy of Sciences, a private, non-profit society of distinguished scholars engaged in scientific and engineering research. In May, Jeffrey A. Segal, PhD, was elected to the American Academy of Arts & Sciences, one of the nation’s most prestigious honorary societies and the leading center for independent policy research; and in November, the American Association for the Advancement of Science (AAAS) announced a record high nine SBU faculty were elected as AAAS Fellows, the most ever elected in one year for Stony Brook University.

7) Through the “Flame Challenge,” Alan Alda and the SBU Center for Communicating Science Inspire Scientists Around the World to Better Communicate Science (March, June, December) – Legendary actor Alan Alda, founding member of the Stony Brook University Center for Communicating Science and a Visiting Professor in the School of Journalism, challenged scientists world-wide to explain a flame to 11-year-olds in the Flame Challenge. The contest was a tremendous success and through widespread media coverage, led to more than 80 million impressions around the world. It also spurred the launch of the Flame Challenge II: “What is time?”

12) Stony Brook Medicine and Southampton Hospital Take Major Step Toward Stronger Partnership (October) – Leadership at Stony Brook University, State University of New York, and Southampton Hospital signed a non-binding letter of intent to strengthen an affiliation in which the 125-bed facility would join the Stony Brook Medicine healthcare system as the two hospitals work more closely to improve healthcare quality and access, coordination of care and efficiency for their patients.