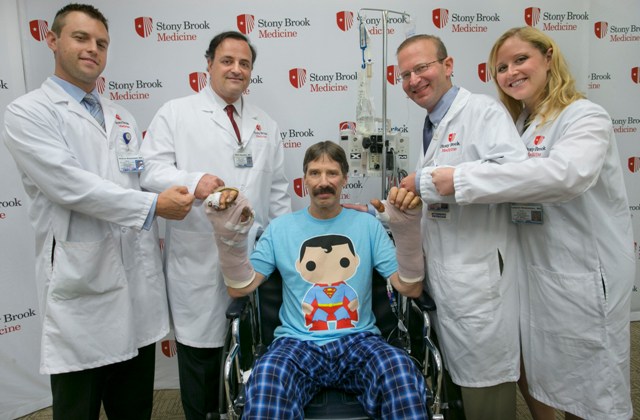 STONY BROOK, NY, May 29, 2013 – A team of hand surgeons at Stony Brook University Hospital (SBUH) successfully reattached the hands of a 53-year-old sheet metal worker from Staten Island, NY, after an accident on May 16 nearly severed them.

Volunteers from North Babylon Fire Department responded to the scene of the accident in North Babylon, NY, and Klapak was airlifted via helicopter by Suffolk County Emergency Management Services paramedics to SBUH, which is Suffolk County’s only Level 1 Trauma Center.

Working within a critical window of six hours or less to re-establish blood flow, the surgical team worked feverishly and meticulously to reconnect the veins, arteries and nerves. After the connections were complete, the skin tone in his hands changed to a pink color, indicating restored blood flow.

“Mr. Klapak is very lucky that he was brought to the right place immediately,” Dr. Ganz said. “He was transported from the Emergency Room to the Operating Room in less time than it took me to change into my scrubs.”

Surgeons used a cadaver nerve to replace a missing nerve that was completely crushed in Klapak’s left hand, Dr. Ganz said, and transplanted a tendon from his right forearm to his left hand as well. Klapak is receiving additional skin grafts to further repair the damage. He will be receiving occupational and physical therapy to maximize his functional outcome.

“Some of the patient’s flexor tendons were uninjured,” Dr. Ganz said, “which ultimately bodes very well for his hand function. Although he will have limited use of both hands, through physical therapy that may last a year or more, and the prospect of additional operations, his prognosis is good.”

“This was obviously a team effort,” Dr. Ganz continued. ”Every nurse, every resident, and every anesthesiologist who took care of him that day made Stony Brook proud.”

Klapak said that when he awoke on May 17 in his hospital room, he saw his hands and wiggled his fingers. “I thought, I hit the lotto,” he said, with a tear in his eye, his voice breaking with emotion, as his wife, Kimberly, comforted him. “I was like, ‘Thank you God.’ I am such a lucky man.”

A guitar player for 45 years who is righthanded, Klapak said he is determined to play the instrument he loves again in the future. He is also looking forward to returning home with his wife, who has been with him around the clock. He praised the hospital staff and the expert care he has received at Stony Brook.

“I wouldn’t trade it for the world,” he said. “It’s incredible. I have nothing but praise for the hospital.”

Stony Brook EMS paramedics staff Suffolk Police helicopters under the medical control and direction of SBUH, completing approximately 450 flights each year. Stony Brook’s Trauma Center is one of four centers in New York State with inpatient survival rates for trauma patients that are significantly above the state average, according to the latest report from the New York State Trauma System.