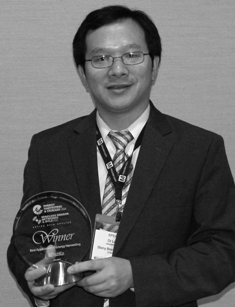 STONY BROOK, NY, November 15, 2012 – Stony Brook University engineers have won a national award for an innovative energy harvester that has the potential to save millions of dollars in energy costs for railroads while reducing carbon dioxide emissions. The team’s work, “Mechanical Motion Rectifier (MMR) based Railroad Energy Harvester,” was awarded “Best Application of Energy Harvesting” at the Energy Harvesting and Storage USA 2012 conference, held in Washington, DC on November 7-8, 2012.

Professor Zuo estimates that the invention could save more than $10 million in trackside power supply costs for railroads in New York State alone, along with a reduction of 3000 tons per year of CO2 and a half million dollars of electricity savings.

“The U.S. has the longest rail tracks in the world, approximately 140,700 miles; that are often in remote areas. It is very important but also very costly to power the track-side electrical infrastructure, such as the signal lights, cross gates, track switches and monitoring sensors,” Professor Zuo said. “Our invention, the ‘Mechanical Motion Rectifier (MMR) based Railroad Energy Harvester,’ can harness 200 watts of electric energy from train-induced track deflections to power the track-side electrical devices. By using two one-way clutches, the innovative mechanical motion rectifier converts the irregular up-and-down vibration motion into unidirectional rotation of the generator, thus breaking the fundamental challenge of vibration energy harvesting and offering significant advantages of high efficiency and high reliability.”

The technology of the MMR based Railroad Energy Harvester has been licensed to Electric Truck, LLC/Harvest NRG, Inc., who initially supported this project. It is also supported by the U.S. Department of Transportation’s University Transportation Research Center (UTRC-II), New York State Energy Research and Development Authority (NYSERDA), SUNY Research Foundation and private industry.

In addition to the economic, environmental and energy benefits of the device, Professor Zuo said the most important technical innovations in this harvester are the unique mechanical motion rectifier that changes the irregular up-and-down vibration into regular unidirectional rotation of the electrical generator, and synergistically integrating the fly wheel into the energy harvesting system to further increase energy conversion efficiency and stable power output. Another important feature is the creative implementation of MMR in one shaft design, which proves to increase the energy converting efficiency to over 70 percent.

“With the MMR design, the technology advances the traditional energy harvesting, including directly generating high-quality DC power without an electrical rectifier in the vibration environment; enabling an electrical generator to rotate in one direction with relative steady speed in a more efficient speed region; and changing the negative influence of motion inertia into positive, thus reducing the mechanical stress and increasing system reliability,” he said. “Such a design not only avoids the challenges of friction and impact induced by oscillation motion, but also enables us to make full use of the pulse-like features of track vibration to harvest more energy.”

Professor Zuo and his team have been working on vibration and thermoelectric energy harvesting in the past several years to harness power from different sources, including trains, cars, tall buildings and ocean waves. In 2011, the team won a prestigious R&D 100 Award – dubbed the “Oscar of Invention” – for the development of retrofit energy-harvesting shock absorbers that convert vibration, bumps, and motion experienced by the suspension of a vehicle or train into electric power. The regenerative shock absorber for cars can harvest 100-400 watts from the vehicle vibrations under normal driving conditions. The shock absorbers also won the Energy Harvesting and Storage USA 2010 award for Best Technology Development of Energy Harvesting.