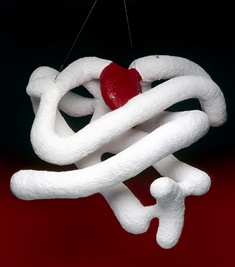 STONY BROOK, N.Y., Nov. 22, 2012 – Fifty years after scientists first posed a question about protein folding, the search for answers has led to the creation of a full-fledged field of research that led to major advances in supercomputers, new materials and drug discovery, and shaped our understanding of the basic processes of life, including so-called “protein-folding diseases” such as Alzheimer’s, Parkinson’s and type II diabetes.

In a review article published in the Nov. 23, 2012 issue of the journal Science, Stony Brook University researchers reviewed the progress on a 50-year-old puzzle called the Protein Folding Problem. Ken Dill and Justin MacCallum of Stony Brook’s Louis and Beatrice Laufer Center for Physical and Quantitative Biology show how a community of scientific researchers rose to tackle a grand-challenge problem of very basic science that had no obvious payoff at the time.

“Protein folding is a quintessential basic science. There has been no specific commercial target, yet the collateral payoffs have been broad and deep,” the researchers said in their paper, The Protein Folding Problem, 50 Years On.


“We have learned that proteins fold rapidly because random thermal motions cause conformational changes leading energetically downhill toward the native structure, a principle that is captured in funnel-shaped energy landscapes. And thanks in part to the large Protein Data Bank of known structures, predicting protein structures is now far more successful than was thought possible in the early days. What began as three questions of basic science one half-century ago has now grown into the full-fledged research field of protein physical science.”

This year marks the 50th anniversary of the 1962 Nobel Prize in Chemistry awarded to Max Perutz and John Kendrew for their pioneering work in determining the structure of globular proteins. That work laid the foundation for structural biology, which interprets molecular level biological mechanisms in terms of the structures of proteins and other biomolecules. Their work also raised the question of how protein structures are explained by physical principles.

Since Perutz and Kendrew discovered the structures of two proteins, nearly 80,000 protein structures have been discovered.  The protein folding “problem” arose when Perutz and Kendrew were unable to make sense of how the folded structure of the protein molecule was related to its sequence of bead types.  Ever since then, there has been great interest in understanding the protein-folding “code”: how does a given string of amino acids lead to a particular balled-up (“native”) structure of a protein?


Proteins are molecules that perform the basic functions in biological cells – converting food to growth, to repairing DNA molecules and damaged cell parts, to motion in muscles, to transduction of signals in the brain and light in the eye, for example.  Humans have about 20,000 different types of protein molecules.  Each performs a different function.  The abilities of proteins to perform such a broad array of powerful chemical functions arise from a peculiar principle of chemical structure and function, namely the folding of each protein.  A protein is miniature string of beads, like a pearl necklace, where the bead-like component pieces are called amino acids.  Amino acids come in 20 different types.  The folding principle is that different sequences of amino acids strung together cause different protein molecules to ball-up in very specific, but different, ways, giving rise to their very different functionalities.

The protein folding problem became a set of three inter-related puzzles: What is the folding code?  How does the protein find its one native structure in fractions of a second inside the cell (the needle-in-a-haystack problem)?  And: Can we make a computer method that can discover new structures of proteins from the large number of amino acid sequences that are now known?

Dill, Director of the Laufer Center and Distinguished Professor of Physics and Chemistry, and MacCallum, a junior fellow at the Laufer Center, describe how huge advances have been made on all three fronts.  They detail some very important collateral payoffs of this work that was completely unanticipated at the time, including the development of the IBM Blue Gene computer and distributed-grid computing, computer-based methods for discovering new pharmaceuticals, a deeper understanding of molecular mechanisms in biology, a deeper understanding of the inter-atomic interactions inside proteins (that has also involved Stony Brook Laufer Center researchers Carlos Simmerling, David Green, and Rob Rizzo), and a new class of very promising polymer materials called “foldamers”.

Dill and MacCallum argue that what started out as one compelling question of basic science has now become an entire field of theoretical and experimental approaches in which many questions are now leading to a few answers and many more questions.