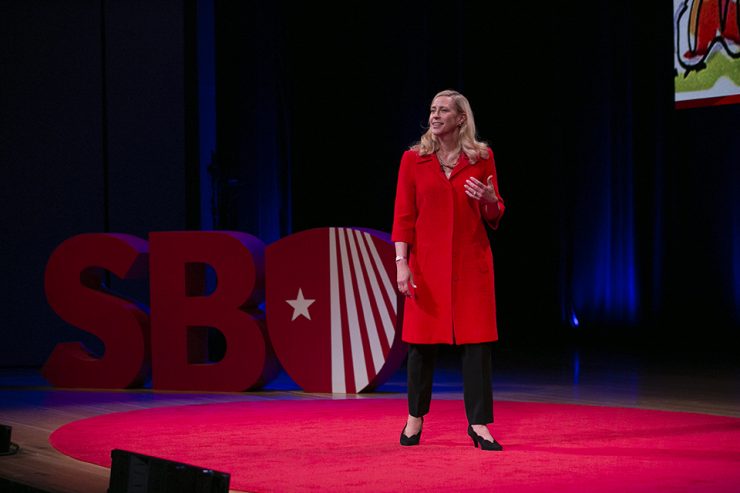 President McInnis explained that, “the future of Stony Brook lies in our ability to create a dynamic, engaged environment that welcomes ambition. It lies in our ability to nurture diversity and collaboration. [We] support excellence across campus and recognize the powerful impact we have on Long Island and in New York State.”

Some of the university’s recent successes the President cited include:

Stony Brook serves a diverse community and graduates many first-generation college students. The university is tasked with preparing the leaders of tomorrow with programs and mentorship opportunities that ensure each and every student is able to realize their ambitions. President McInnis expressed the university’s commitment to delivering a quality, transformative educational experience to all students.

President McInnis also praised Stony Brook’s “dynamism” that comes from the university’s faculty and the promotion of hands-on learning for students. She described the efforts to “foster the inclusive pedagogy that will translate students’ classroom learning into real experience.” One program she cited was the College of Engineering and Applied Sciences’ Vertically Integrated Projects Program, which brings together undergraduates, graduate students and faculty members in multiple disciplinary teams to work on real-world projects in research, design and entrepreneurship.

President McInnis expressed continued support for the university’s scholars and positioning of Stony Brook’s research to help solve the world’s critical challenges. The university has used strategic planning through various programs to find ways that Stony Brook can further support their academic ambitions and partner with other industries and institutions. Tiger Teams, made up of faculty, have been implemented to prepare faculty in advance of new federal funding opportunities. The university looks to position faculty and discovery-driven researchers to be “ahead of the curve” in areas that include advanced energy, robotics, data storage and biomedicine among others. Stony Brook has recently secured a $10M grant to develop the Long Island Network for Clinical and Translational Science (LINCATS) program, a network of regional biomedical research institutions to advance clinical care for underserved communities across Long Island with pilot funding focused on faculty and postdoctoral fellows who are early-career, women or underrepresented groups.

Regarding Stony Brook Medicine (SBM), President McInnis praised the group as being “the leading provider of high-quality healthcare for communities on Long Island.” She particularly addressed the group’s response to the COVID pandemic through caring for patients, bolstering telemedicine enterprises and collaborating with New York State to provide testing and vaccinations. “As the past two years have highlighted, the effects of an agile, flexible, accessible and quality medical enterprise [have been] life-changing,” said the President.

She went on to say, “Stony Brook Medicine defines itself through quality, through innovation, and through impact as a unique institution with doctors and healthcare providers who have access to the most contemporary technology and cutting-edge practices.”

In addition to the COVID support provided to Long Island, President McInnis highlighted these SBM initiatives:

The President concluded with the feedback she received from the University’s Visioning Committee, which is composed of faculty, staff, graduate and undergraduate students, about Stony Brook’s strategic planning for the future.

“We want more opportunity for connection; more support for our ambitious research and talent; more ways to effect change with our healthcare system; more programs to promote diversity, inclusion and equitable education; more focus on a sense of dynamism, welcoming and belonging. This is how Stony Brook will reach a new level of excellence, one that reimagines what’s possible for society at large and that cements this university’s role as a first-choice destination,” she said.

President McInnis thanked the faculty and staff for their dedication and “nurturing of the dynamic culture that is Stony Brook,” as well as the university’s “energetic, determined students who are setting the pace for a brighter and more just future.”

President McInnis also thanked the leadership team, including the University Council and the Presidential Cabinet, the University Senate and alumni and donors who are “helping to transform the higher education experience for the community.”

She also thanked the elected officials from Long Island who “fight for us every day here, in Albany, and across the state because they know how valuable Stony Brook University is to all of New York,” as well as New York Governor Kathy Hochul, “who from the start of her term, has recognized Stony Brook University’s value.” As is customary at the State of the University, the President also welcomed newly-hired faculty.

Stony Brook University — New York’s flagship university and No. 1 public university — is going far beyond the expectations of today’s public universities. It is part of the State University of New York (SUNY) system. With nearly 26,000 students, more than 2,800 faculty members, more than 200,000 alumni, a premier academic health center and 18 NCAA Division I athletic programs, Stony Brook is a research-intensive distinguished center of innovation dedicated to addressing the world’s biggest challenges. The university embraces its mission to provide comprehensive undergraduate, graduate and professional education of the highest quality, and is ranked among the top 35 public universities by Forbes and one of the top 100 universities in the nation by the U.S. News & World Report Best Colleges listing. Fostering a commitment to academic research and intellectual endeavors, Stony Brook’s membership in the Association of American Universities (AAU) places it among the top 65 research institutions in North America. The university’s distinguished faculty have earned esteemed awards such as the Nobel Prize, Pulitzer Prize, Indianapolis Prize for animal conservation, Abel Prize and the inaugural Breakthrough Prize in Mathematics. Stony Brook has the responsibility of co-managing Brookhaven National Laboratory for the U.S. Department of Energy — one of only eight universities with a role in running a national laboratory. Providing economic growth for neighboring communities and the wider geographic region, the university totals an impressive $7.23 billion in increased economic output on Long Island. Follow us on Facebook (https://www.facebook.com/stonybrooku/) and Twitter(@stonybrooku).