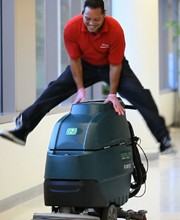 STONY BROOK, N.Y., October 15, 2012 – Stony Brook Medicine has entered the second annual national Pink Glove video competition, sponsored by MedLine Industries Inc., with a four-minute video capturing the spirit of Stony Brook physicians and staff, as well as the broader Stony Brook community, in their dedication to fighting breast cancer. On Friday, Oct. 12, voting opened nationwide to determine which videos will receive the most votes, with prize money donated for breast cancer research.

“We danced the dance, and now it’s time to rock the vote,” said Linda Bily, Cancer Patient Advocacy & Community Outreach Coordinator for the Stony Brook University Cancer Center, who coordinated production of Stony Brook’s video. “We need the support not only of the campus, but from the broader community we serve, since our goal is 75,000 votes in just two weeks’ time.”

Last year, Medline sponsored its first online competition nationwide to find the best Pink Glove Dance video. The competition featured 139 videos from hospitals, nursing homes, schools and other organizations throughout the U.S. and Canada. The contest quickly became a national social media phenomenon, with the videos receiving more than 1.2 million views, a half a million votes and thousands of tweets, blogs and texts. Lexington Medical Center in West Columbia, S.C., won last year’s competition with 61,054 votes.

Now the race is on to see which video will garner the most votes in 2012, with a top prize of $10,000 to be donated for breast cancer research to the winner’s selected charity of choice. Second prize is $5,000 and third prize is $2,000. Voting ends at midnight on Friday, Oct. 26, and the winners will be announced on Nov. 2.

Voting will be conducted using a contest application integrated with Facebook. Users must have a Facebook account and be logged into their account to vote. Users may access the contest application either on Facebook, via a link on www.Facebook.com/medlinebreastcancerawareness or from the contest page that will be displayed on www.Pinkglovedance.com. Entries are displayed alphabetically so voters can easily locate the entry they wish to vote for.

Stony Brook’s video is set to the tune of “You Won’t Dance Alone,” by the Best Day Ever, which was the song used in the second year of the Pink Glove Dance competition. It features campy performances by such leaders as Kenneth Kaushansky, MD, Senior Vice President, Health Sciences, and Dean, Stony Brook University School of Medicine, and Yusuf Hannun, MD, Director of the Cancer Center, Vice Dean, Cancer Medicine and the Joel Kenny Professor of Medicine as well as many Stony Brook University sports teams and clubs, and community supporters.

“This is all in good fun, but for serious business: defeating breast cancer,” said Dr. Hannun. “This video project is symbolic of all that we can accomplish when we join together to achieve one unifying goal. It symbolizes the enormous teamwork at Stony Brook Medicine in dedicating our research efforts toward finding a cure for this disease.”

Dr. Hannun in particular recognized Linda Bily for her role in coordinating the video, along with Lynn Spinnato of Spinnato Gallery, who served as director; and Lauren Kaushansky, Instructor in the Professional Education Program, Department of History, at Stony Brook University, who served as creative consultant on the project.