Teen Brain Injury patient: It Pays to Wear a Helmet 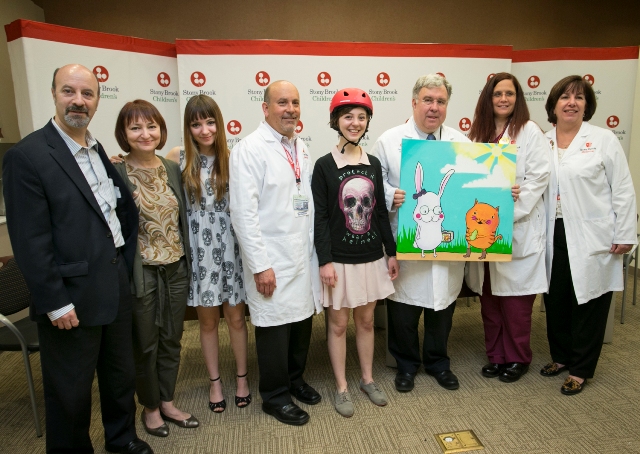 Teen Brain Injury patient: It Pays to Wear a Helmet

Arielle Budnick, injured in a skateboarding accident, returns to Stony Brook to thank caregivers and send a safety message


STONY BROOK, NY, May 29, 2013 – Arielle Budnick, 18, from Queens, N.Y., has a message for other teenagers and those bicycling and skateboarding this summer – wear a helmet.

Budnick is fully recovered one year after a life-threatening traumatic brain injury resulting from a 2012 Memorial Day weekend skateboarding accident when she was not wearing a helmet. After emergency neurosurgery at Stony Brook Long Island Children’s Hospital, a follow-up surgery last July and many months of rehabilitation, she came back to Stony Brook on May 16  to thank her caregivers and help spread the message on the importance of helmet safety.


“After this experience I realize the true value of life,” said Budnick. “It pays to wear a helmet, and none of this would have happened if I were wearing a helmet.”

Arielle and her parents, Stacy Heller Budnick and Steven Budnick, acknowledged Stony Brook neurosurgeons Michael Egnor, MD, and Fred Gutman, MD, and the pediatric intensive care specialists that made Arielle’s recovery possible. They said throughout the school year Arielle continued to improve and eventually exceled as she did in previous years. On June 26, Budnick, an aspiring artist, will graduate from the Frank Sinatra High School for the Arts and plans attend Hunter College on a four-year scholarship in the fall.

Her journey was a long one that began when Arielle fell and fractured her skull while skateboarding with a friend in Southampton, Long Island, on May 26, 2012. Arielle does not remember much about the fall. Emergency Medical Services airlifted her to Stony Brook. She developed a hematoma (bleed) in the brain, which began to worsen, and emergency surgery was necessary.

Dr. Gutman, Assistant Professor of Clinical Neurological Surgery, and Director of Stony Brook Medicine’s Neurosurgery Inpatient Service, performed a craniectomy on Arielle. He removed a piece of bone from her skull, a flap of bone several inches long, to relieve the pressure building on her brain that could cause increased trauma or even death. After the procedure, Arielle spent one week recovering in the Pediatric Intensive Care Unit (PIC) at Stony Brook Children’s.

Upon being discharged from Stony Brook, Arielle began intensive therapy at rehabilitation centers closer to her home. She received physical therapy and speech therapy for two months.

In July 2012, Arielle returned to Stony Brook for a second surgery. The bone flap, which had been frozen, was surgically placed back into her skull by Dr. Egnor, Professor of Neurological Surgery and Pediatrics, and Director of Pediatric Surgery at Stony Brook Medicine. Dr. Egnor, who has overseen Arielle’s case, says she has made a full recovery.

In gesture of gratitude, Arielle presented Dr. Egnor and the Stony Brook Children’s team with one of her own paintings entitled “Best Friends.” The painting is geared toward children and a colorful depiction of a rabbit with a cat, which she created as part of her artwork for Project Sunshine.

Dr. Egnor surprised Arielle with a gift from Stony Brook – a red bicycle helmet with a Stony Brook Children’s emblem. Arielle put the helmet on immediately, as if she were ready for action.

Now a staunch advocate of wearing a helmet, Arielle is taking her message directly to classmates during the final month of school. She is sharing her story during gym classes and includes a presentation on the importance of helmet safety with a representative from a hospital in Queens.