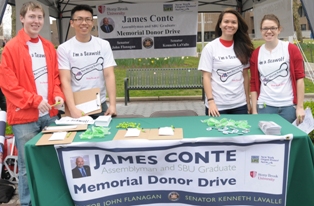 A graduate of SBU, Conte was a two-time kidney transplant recipient before his death at age 53 in October 2012. He was a strong advocate and a leader in advancing organ, eye and tissue donation, including sponsoring legislation to ensure New Yorkers were able to document their wishes to be organ donors on the New York State Donate Life Organ, Eye and Tissue Donation Registry. Among many bills, he sponsored Lauren’s Law, aimed at increasing organ donor enrollment, which was unanimously passed by the Legislature in June 2012 and signed into law by New York Governor Andrew M. Cuomo in October 2012.

“An organ donation is an invaluable gift that any one of us can give to a loved one or a stranger,” Sen. LaValle said. “Organ donation can save a life and change a life. There’s no greater legacy.”

“The New York Organ Donor Network applauds Senators John Flanagan and Kenneth P. LaValle, and the students of Stony Brook University for continuing the great work of the late Assemblyman Jim Conte,” said Helen Irving, President and CEO of the New York Organ Donor Network. “Jim was a tireless advocate for organ donation in New York State. The students as well as the Senators are part of an important movement to increase organ donor enrollment in New York.  On behalf of the 10,000 New Yorkers waiting for a life-saving transplant, we say thank you.”

The NYODN is targeting those ages 18-35 to become organ donors through its current marketing campaign, called “Hate the Wait.” It is estimated that a New Yorker dies every 15 hours waiting for an organ donation, according to NYODN officials. Only 21 percent of New Yorkers age 18 and over have signed the state’s organ donor registry, compared with a national average of 45 percent who have signed donor registries in other states.

“I couldn’t think of a better place to bring the ‘Hate the Wait’ Campaign than Stony Brook,” said Knight, a 22-year-old senior in the Stony Brook School of Nursing from Newburgh, NY, who is majoring in nursing and anthropology. “This campus has become a leader in so many life-changing initiatives, and the Organ Donor Registry has become one of them.”

“The other students and I are thrilled to be a part of such an incredible initiative and we know that Stony Brook will make a difference in the lives of those waiting for a donor,” said Tabitha Yim, 21, a senior nursing student from Queens, NY.

Every year, more than 1,500 people receive kidneys, livers, and hearts that have been donated for transplantation. However, with more than 10,000 New Yorkers still on waiting lists, the need for organ donations far exceeds the supply. One person who donates organs (hearts, lungs, liver, kidneys, pancreas and intestine) can save up to eight lives, while tissue donors (corneas, bone, skin, heart valves, tendons, veins, etc.) can improve 12 or more lives by restoring eyesight, helping fight infections in burn patients and prevent the loss of mobility and disability.

Currently, the waiting list nationwide has nearly 118,000 patients waiting for a lifesaving transplant, including more than 96,000 patients who are in need of kidney transplants.

In Suffolk County, a total of 282,206 people are enrolled in the New York State Donate Life Organ and Tissue Donor Registry. By enrolling in the registry, you give legal consent for the recovery of your organs, tissues and eyes for the purposes of transplantation and research at the time of your death. For more information, visit www.donatelifeny.org.

The New York Organ Donor Network (NYODN) is a nonprofit, federally designated organ procurement organization (OPO) dedicated to the recovery of organs and tissue for transplant in the greater New York metropolitan area. Established in 1978, the Donor Network is the second largest OPO in the United States, serving a culturally and ethnically diverse population of 13 million. The network works closely with 10 transplant centers and more than 90 hospitals in the region to facilitate donation. The NYODN strives to raise awareness for organ, eye, and tissue donation and transplantation, educate the public, and encourage residents to enroll in the New York State Donate Life Registry. NYODN is accredited by the Association of Organ Procurement Organizations (AOPO) and a member of the United Network for Organ Sharing (UNOS), which oversees the organ transplant waiting list in the U.S. To learn more, visit www.donatelifeny.org.