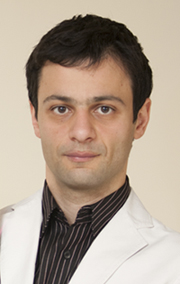 Oganov finds novel compounds in search for the keys to the paradox of missing xenon in Earth’s atmosphere; findings may pave the way for new advances in the theory of chemical bonding

Artem R. Oganov, PhD, Professor of Theoretical Crystallography in the Department of Geosciences and Department of Physics and Astronomy at Stony Brook University.

STONY BROOK, NY, November 12, 2012 – An international team led by Artem R. Oganov, PhD, a professor of theoretical crystallography in the Department of Geosciences and Department of Physics and Astronomy at Stony Brook University, has established stability of several oxides of normally inert xenon. These compounds are predicted to be stable at high pressures above 830,000 atmospheres, i.e. at pressures corresponding to the Earth’s mantle and readily achievable in the laboratory. The results of their work, “Stability of xenon oxides at high pressures,” were published November 11 in Nature Chemistry(1).

Dr. Oganov and his team used Oganov’s novel method for crystal structure prediction, which allowed them to find optimal structures and compositions of new compounds at any given pressure. In this work, they applied it to finding stable xenon oxides and silicates. It has earlier been suggested that xenon oxides or silicates are formed in Earth’s interior, and prevent xenon from escaping into the atmosphere – thus explaining the “missing xenon paradox”, i.e. the observed order-of-magnitude depletion of xenon in the atmosphere.

“Xenon has to be stored in Earth’s mantle, otherwise we would have to admit that the existing chemical models of the Earth are deficient, probably as a result of an unknown cosmochemical process that removed xenon from the Earth,” said Oganov. “We have found that while xenon silicates cannot be stable at pressures of the Earth’s mantle, xenon oxides do become stable at these conditions. However, these are extremely strong oxidants and cannot exist in the reducing environment of the Earth’s deep mantle. Our work, however, suggest another possibility – since strong Xe-O bonds can be formed under pressure, xenon atoms can be trapped and retained by defects and grain boundaries of mantle minerals, and our simulations give suggestions for local geometries of such trapping sites.”

In addition to solving an important geological puzzle, present results shed light on the still elusive chemistry of xenon. The very possibility of xenon, an inert gas, to form stable chemical compounds with fluorine and oxygen, was proposed theoretically by Pauling in 1932 and verified in 1962 in landmark experiments by Neil Bartlett. However, only xenon fluorides were found to be thermodynamically stable; xenon oxides turned out to be unstable to decomposition into xenon and oxygen, with some decomposing explosively. The work of Oganov’s group for the first time finds stable xenon oxides, and concludes that high pressure is necessary for their stability.

The new structures are very rich in chemistry: with increasing pressure, increasing oxidation states of xenon are found, from +2 to +4 to +6. Predictions include some very unusual structures; for example, the P42/mnm phase of XeO3 contains linear chains of O2 molecules, which partially dissociate on increasing pressure. The authors found a very clear electronic signature of different valence states of xenon in different structures – something that could pave the way for new advances in the theory of chemical bonding. Another surprise was the unexpectedly high (50%) degree of ionicity in these semiconducting compounds.

“Chemical bonding appears to be simpler than expected by many,” said graduate student Qiang Zhu, the lead author of this paper. “You don’t need to invoke d-orbitals and exotic types of hybridization of Xe atoms. Bonding is significantly ionic; valence states differ by the number of p-electrons removed from Xe atoms, and pressure is essential for enabling such significantly ionic bonding”. Pressure-induced ionization, observed in many other compounds and even pure elements, appears to soften interatomic repulsions.

“In addition to providing a likely solution to the missing xenon paradox and clarifying essential aspects of xenon chemistry, our study may result in practical applications,” says Oganov. “For example, the ability of xenon to form strong chemical bonds with oxygen and other elements, and to be trapped in crystalline defects, suggests their use as non-classical luminescence centers and active sites for catalysis”.