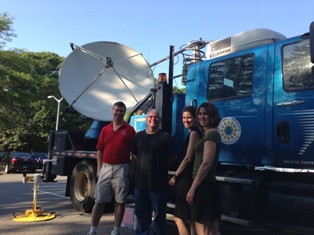 Pictured in front of the Doppler on Wheels 6 from left to right are: Professor Brian Colle, SoMAS at Stony Brook University; Joshua Wurman and Karen Kosiba of the Center for Severe Weather Research; and Kelly Lombardo, SBU Postdoctoral researcher.

STONY BROOK, NY, June 26, 2013 – Stony Brook University in collaboration with the National Weather Service (NWS) and the Center for Severe Weather Research in Boulder, CO, is hosting and participating in the DREAMS (Doppler Radar for Education And Mesoscale Studies) project, a three-week National Science Foundation-funded endeavor to study storms, sea breezes and other weather phenomena around the New York City (NYC) and Long Island area. The project, led by Dr. Brian Colle, a Professor in the School of Marine and Atmospheric Sciences (SoMAS) at Stony Brook, is utilizing the Doppler on Wheels 6 (DOW 6), a truck equipped with a Doppler weather radar and a set of weather instruments that can be deployed in the field (a “pod”). A research (Long –EZ) aircraft piloted by Professor John Mak of SoMAS is also collecting high frequency wind and temperature data just south of Long Island for some events.

The participants in DREAMS include Professor Colle and his Coastal Meteorology and Atmospheric Prediction (COMAP) research group, 15-20 Stony Brook undergraduate atmospheric students, some forecasters from the NWS office for NYC located at Brookhaven National Laboratory (BNL), and a few students and faculty from Nassau Community College. The group is measuring and investigating small-scale phenomena, such as how thunderstorms evolve as they cross an urban coastal region such as New York City and Long Island, and how sea breezes develop on the north and south shores of Long Island, which can potentially modify thunderstorm development.


Long Island’s weather patterns, surface observations and numerical models have been studied in the past using conventional radar located at the NWS office at BNL. This project marks the first time a high-resolution Doppler radar can be brought up close to the action to zoom in on Long Island’s local weather phenomena.

“Students have the opportunity to operate the Doppler radar, launch weather balloons, deploy a weather instrument pod in the field, take weather observations with their vehicles and help with daily weather briefings for field operations,” said Professor Colle.

The research team is operating the DOW 6 to measure: the change in thunderstorm winds and precipitation intensity near the coast, the depth and inland movement and speed of the sea breeze, and how a strong low-level jet called the New York Bight Jet develops near the south shore of New York City due to the strong regional temperature gradients between the sea and land, and the small-scale precipitation structures associated with flooding rains.


“This field project provides students an excellent opportunity to learn how a Doppler radar works,” said Professor Colle. “At the same time it provides a unique hands-on research opportunity on how different weather phenomena evolve around Long Island and New York City.”

The project kicked off at Stony Brook University on June 17, 2013 with an open house and seminar with Drs. Joshua Wurman and Karen Kosiba of the Center for Severe Weather Research and of the former Discovery Channel show “Storm Chasers.” During the presentation, Drs. Wurman and Kosiba explained how the Doppler on Wheels truck works and some of their experiences in the Great Plains studying tornado motion and evolution and on the coast studying small-scale wind structures within hurricanes.