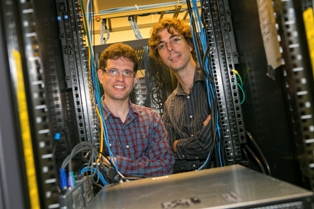 STONY BROOK, NY, October 3, 2012 – A collaborative team of computer scientists from Stony Brook University and Rutgers have been chosen by the National Science Foundation (NSF) as one of eight projects to receive a share of $15 million in funding in the White House’s Big Data fundamental research initiative. The project, “Eliminating the Data Ingestion Bottleneck in Big-Data Applications,” comes with $1.2 million in funding from February 2013 through January 2017. Stony Brook’s share of the award is $800,000.

“Faster storage systems based on our algorithms will enable scientists, engineers and businesses to deal with data sets that are now beyond reach,” said Professor Bender. “This project will allow applications to handle today’s workloads more efficiently – saving money, energy, time and space.”

“The problem with Big Data is that it’s composed of many small pieces of data, and existing algorithms are not well-suited for handling them,” said Professor Johnson. “Current algorithms are limited by the speed of moving parts in a disk, which have not improved significantly in the last 20 years. The algorithms being developed in this project avoid operations that disks perform slowly and take advantage of operations they perform quickly.”

The NSF’s Big Data awards are aimed at developing new tools and methods to extract and use knowledge from collections of large data sets to accelerate progress in science and engineering research and innovation.

“I am very excited that Stony Brook University is on the team that is participating in this important National Science Foundation initiative,” said Samuel L. Stanley Jr., M.D., President of Stony Brook University. “Creating efficiencies around the collection and use of large, complex data sets has applications in every scientific field today and I am both confident and impressed that Professors Bender and Johnson will be able to contribute to its progress.”

“This project will be transformative for the storage of Big Data,” said Dennis N. Assanis, Provost and Senior Vice President for Academic Affairs at Stony Brook University. “Big Data storage has been a major issue for the past 20 years, and the algorithms for quicker and more efficient storage developed by Professors Bender and Johnson could have great implications for research and our workforce.”

Professor Bender was a member of the Sandia team that won the Compute Processor Allocator (CPA) R&D 100 Award for scheduling in parallel computers. He is the recipient of four awards for both undergraduate and graduate teaching and has authored or co-authored more than 90 articles in various peer-reviewed research journals. In 2006, he co-founded a start-up company Tokutek, Inc., for which he serves as Chief Scientist, and has held Visiting Scientist positions at MIT and King’s College, London. He earned his BA in Applied Mathematics from Harvard University, a DEA in Computer Science from the Ecole Normale Superieure de Lyon, France, in 1993, and completed his PhD in Scheduling Algorithms from Harvard in 1998.

Professor Johnson conducts research in Software Security, System Security, Usable Security, and Cryptography.  He serves as the director of the Security, Privacy and Theory (SPLAT) lab at Stony Brook, the Cryptography Lab at the New York Center for Excellence in Wireless and Information Technology (CEWIT), and the Smart Grid Cyber-security Testing Lab of the New York Advanced Energy Research and Technology Center (AERTC). He graduated from UC Berkeley in 2006 with a PhD in Computer Science, where he studied with David Wagner.


About the Computer Science Department at Stony Brook University