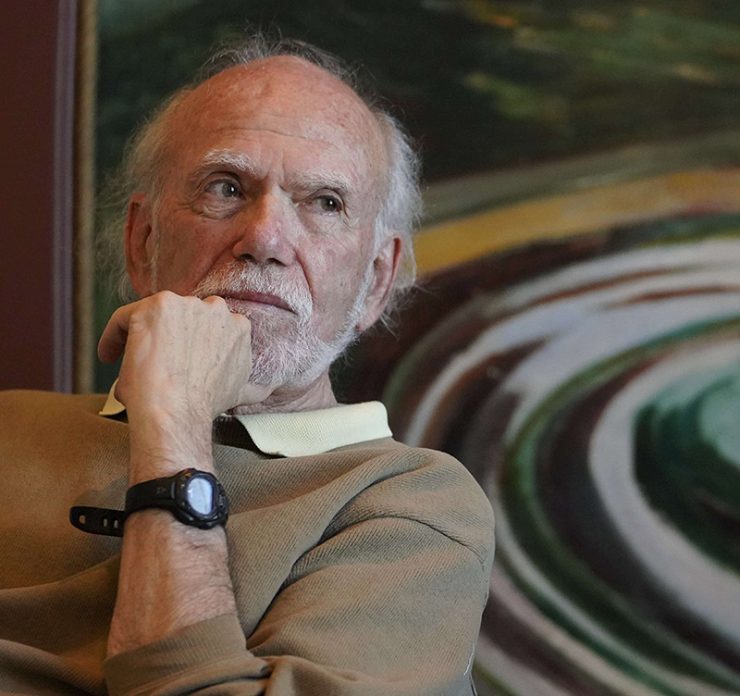 Professor Barish To Speak at the Inaugural Colloquium of the C.N. Yang Colloquium Series, Tuesday, September 6 at 4:30pm, ET

Stony Brook, NY—September 6, 2022 at 4:30pm, ET–World renowned experimental physicist and Nobel Laureate Barry Barish, PhD, will be joining Stony Brook University to serve as the inaugural President’s Distinguished Endowed Chair in Physics beginning in the fall semester of 2023. Professor Barish shared the 2017 Nobel Prize in Physics for the observation of gravitational waves with the historic Laser Interferometer Gravitational-wave Observatory (LIGO) experiment. This research proved the ripples in the fabric of space and time that were predicted by Albert Einstein 100 years earlier. Professor Barish is also the Ronald and Maxine Linde Professor of Physics, Emeritus, at the California Institute of Technology (Caltech).

Professor Barish is the inaugural featured speaker of the newly established C.N. Yang Colloquium series in the Department of Physics and Astronomy. The series honors his fellow Nobel Laureate in Physics and Stony Brook University faculty member Professor C.N. Yang. Professor Yang is the namesake of the C.N. Yang Institute for Theoretical Physics at Stony Brook. The title of Professor Barish’s colloquium is “Probing the Universe with Gravitational Waves.”  To watch live, please visit here today, September 6, at 4:30pm, ET.

“Stony Brook University has a profound legacy of discovery–research and innovations that expand our world, shift public perspective, and help us to better understand the cosmos. In his awe-inspiring career, Professor Barry Barish has done all three,” said Stony Brook University President Maurie McInnis. “His position as the President’s Distinguished Endowed Chair in Physics is a testament to Stony Brook’s proven excellence in Physics and Astronomy, as well as to this university’s commitment to remain on the cutting edge of knowledge. We are honored to welcome Professor Barish to campus and so excited for the many students and researchers who will be able to learn from this history-making physicist.”

“This is such exciting news for Stony Brook,” said Executive Vice President and Provost Carl Lejuez. “We have a storied history in physics, starting with C.N. Yang, and continuing through the last several decades. The welcome addition of Professor Barish to our Department of Physics and Astronomy reflects Stony Brook University’s role as a leading center of research at the cutting edge of discoveries that help us understand our universe.“

“Professor Barish is an exceptional physicist and what he has accomplished with the LIGO experiment is phenomenal,” said Professor Jung who has known Professor Barish for more than 30 years. “His work resulted in not only the discovery of gravitational waves that were predicted by Einstein’s theory of general relativity but also the observation of two black holes merging in real time, which opened a new field of observational astronomy based on gravitational waves. Consequently, his contributions and influence in science go beyond particle physics, reaching astronomy, astrophysics and cosmology. I am exceptionally excited about him joining Stony Brook’s faculty. This is a historic appointment for Stony Brook. He will be an inspiration to our students, postdocs, and faculty.”

“Stony Brook has long been a very special place for physics and I am excited to help celebrate that history by delivering the inaugural C.N. Yang lecture,” said Professor Barish. “Even more, I am looking forward to  joining the physics faculty in 2023, where I will continue to pursue the forefront issues in physics.”

Professor Barish will continue his affiliations with Caltech and the University of California, Riverside.

Professor Barry Barish was awarded the 2017 Nobel Prize in Physics “for decisive contributions to the LIGO detector and the observation of gravitational waves.” He shared the prize with American physicists Rainer Weiss and Kip S. Thorne.

Barish began his career in high-energy physics. He worked on experiments at the Stanford Linear Accelerator Center and Fermilab, where he was among the first to observe the weak neutral current, a linchpin of the electroweak unification theories of Glashow, Salam, and Weinberg. In the 1980s he directed MACRO, an experiment that searched for exotic particles called magnetic monopoles and also studied penetrating cosmic rays, including neutrino measurements that provided important confirmatory evidence that neutrinos have mass and oscillate. He also headed a team to design an experiment for the Superconducting Super Collider (SSC), a giant particle accelerator to be built in Texas, but the U.S. Congress canceled that project in 1993.

After the cancellation of the SSC, Barish became LIGO principal investigator in 1994. The National Science Foundation (NSF) in its 1992 and 1993 reviews of LIGO had expressed doubts about its feasibility and management structure. Barish instituted technical changes to LIGO’s design, such as using solid-state lasers, which were more powerful than the originally planned argon gas lasers. LIGO was run mainly as a small collaboration between Caltech and the Massachusetts Institute of Technology. Barish realized that LIGO would need permanent staff and many more scientists to help in what was an extremely technically demanding project. In 1997 he established the LIGO Scientific Collaboration (LSC), a team of hundreds of scientists from around the world. That same year Barish became LIGO director. Barish’s changes pleased the NSF, which funded LIGO at a much higher level, and were credited with doing much to make LIGO a success.

Construction began on LIGO’s two interferometers at Livingston, Louisiana, and Hanford, Washington, in 1994, and observations began in 2002. Although LIGO had not detected any gravity waves in its early years, Barish pushed through plans for an upgraded version, Advanced LIGO, that would. Advanced LIGO was approved by the NSF in 2004, and it was completely installed in 2014. On September 14, 2015, Advanced LIGO made the first detection of gravity waves from a pair of black holes that spiraled into each other 1.3 billion light-years away.

From 2005 to 2013 Barish was director of the Global Design Effort of the International Linear Collider (ILC), a proposed 31-kilometer- (19-mile-) long linear particle accelerator. The ILC is the highest priority future project for particle physics worldwide.

Stony Brook University, a flagship of the State University of New York (SUNY) system, is going far beyond the expectations of today’s public universities. With nearly 27,000 students, 2,800 faculty members, more than 200,000 alumni, a premier academic medical center and 18 NCAA Division I athletic programs, Stony Brook is a research-intensive distinguished center of innovation dedicated to addressing the world’s biggest challenges. The university embraces its mission to provide comprehensive undergraduate, graduate and professional education of the highest quality, and is ranked among the top 35 public universities by Forbes and one of the top 100 universities in the nation by the U.S. News & World Report Best Colleges listing. Fostering a commitment to academic research and intellectual endeavors, Stony Brook’s membership in the Association of American Universities (AAU) places it among the top 65 research institutions in North America. The university’s distinguished faculty have earned esteemed awards such as the Nobel Prize, Pulitzer Prize, Indianapolis Prize for animal conservation, Abel Prize and the inaugural Breakthrough Prize in Mathematics. Stony Brook has the responsibility of co-managing Brookhaven National Laboratory for the U.S. Department of Energy — one of only eight universities with a role in running a national laboratory. Providing economic growth for neighboring communities and the wider geographic region, the university totals an impressive $7.23 billion in increased economic output on Long Island. Follow us on Facebook (https://www.facebook.com/stonybrooku/) and Twitter(@stonybrooku).