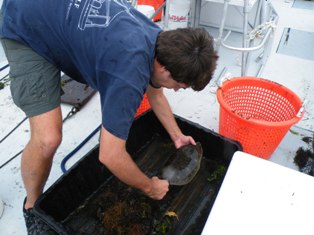 STONY BROOK, July 24, 2013 – Research conducted in six bays of Long Island, NY, and led by scientists from the School of Marine and Atmospheric Sciences at Stony Brook University (SBU) showed that local populations of winter flounder are inbred, which is a situation that is not usually considered in marine fisheries management.  The scientists also determined that the effective number of breeders in each bay was below 500 fish, suggesting that the spawning populations of this historically common fish are now relatively small in the area.

“Severe inbreeding and small effective number of breeders in a formerly abundant marine fish,” was published online in the journal PLOS ONE, and is one of the first studies indicating the occurrence of inbreeding in a marine fish. The scientists extracted genomic DNA from the fins of 267 young of the year winter flounder caught over a period of several months in 2010 and 2011, and used 11 polymorphic microsatellite loci (molecular markers) to test for genetic diversity.


“While documented to occur in freshwater fish, inbreeding in marine fish is generally not a serious concern because of their perceived ability to move through larger areas to find mates and, historically anyway, their much larger population sizes making it unlikely they would spawn with relatives,” said Shannon O’Leary, lead author and doctoral student at SBU. “Our research suggests that the possibility of inbreeding should be considered in the management of some commercially and recreationally exploited marine fish.”

Inbreeding has been linked to lower survival and reproductive rates as well as lower resistance to disease and environmental stress, which could directly contribute to the failure of fish populations to recover from exploitation.  However, since inbreeding has not been considered likely in marine fish, current fisheries management practices have been developed without incorporating its associated risks.

“We are just beginning to realize that marine fish frequently exist as a series of smaller subpopulations as opposed to one large, well-mixed and widely distributed population,” said Dr. Demian Chapman, leader of the research team, who is an assistant professor in the School of Marine and Atmospheric Science and assistant director for science at the Institute for Ocean Conservation Science at SBU.  “The evidence of inbreeding we have found supports this new paradigm. The number of effective breeders in each bay is also alarmingly low and argues for strong fisheries management and habitat restoration initiatives to rebuild winter flounder populations in Long Island bays.”

Genetic analyses for this research were supported by the Institute for Ocean Conservation Science with operational funds from The Pew Charitable Trusts. Microsatellite amplification was carried out in the Pritzker Laboratory for Molecular Systematics and Evolution operated with support from the Pritzker Foundation. Shinnecock Bay fish were sampled during the Shinnecock Bay Restoration Project, which is funded by the Laurie Landeau Foundation and matched by a gift from the Simons Foundation. Further funding was granted by the Saltonstall-Kennedy Grant Program (NOAA) and a NY DOS grant for field work in Hempstead Bays.

The Institute for Ocean Conservation Science at Stony Brook University is dedicated to advancing ocean conservation through science. The Institute transforms real-world policy while pursuing serious science, both of which are essential for ocean health.  http://www.oceanconservationscience.org/