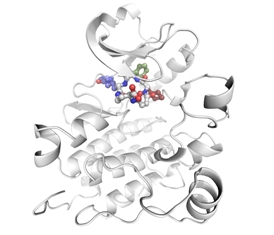 
STONY BROOK, N.Y., March 28, 2012 – Markus Seeliger, Ph.D., Assistant Professor, Department of Pharmacological Sciences, Stony Brook University School of Medicine, and collaborators at Harvard University, have developed and characterized the mechanism of a new class of highly specific inhibitors of the Src (sarcoma) kinase, known as a cancer-causing protein. The research, published in the April 2012 edition of Nature Chemical Biology, may provide a foundation to developing new targeted cancer therapeutics.

The activity of protein kinases, a large class of signaling molecules, must be closely regulated or signaling chaos arises within cells. Signaling chaos sets off a process that is implicated in the development of cancers, including solid tumors. Because protein kinases have a central role in cell signaling, researchers have devoted decades of investigation to developing protein kinase inhibitors.

One kinase inhibitor, a drug called Imatinib (or Gleevec), illustrates the profound potential of kinase inhibitors in cancer treatment. The hyperactivity of the Abl kinase is the most common cause of chronic myelogenic leukemia (CML). Imatinab is routinely used to treat CML. Since Imatinib’s Food and Drug Administration-approval in 2001, deaths related to CML have dropped significantly.

Src kinase inhibitors have been used in clinical trials as experimental treatments for many types of solid tumors. However, in contrast to the success of Imatinib for treating CML, a drug based on inhibiting the Src kinase has not been effective in treating solid tumors.

“Think of kinases as a traffic light system that is regulated to keep traffic flowing properly,” says Dr. Seeliger. “But if all lights on a road system are green, chaos occurs. The Src kinase is a dangerous ‘traffic light’ when it stays green. The challenge is to inhibit Src kinase, in other words make it a ‘red light,’ without stopping other Src family of kinases from staying ‘green’ to keep the traffic moving safely.”

In “Highly specific, bisubstrate-competitive Src inhibitors from DNA-templated macrocycles,” the researchers successfully completed two steps that are necessary for the development of new Src kinase-targeted drugs.

First, under the direction of David Liu, Ph.D., Professor, Department of Chemistry, Harvard University, the team developed chemical inhibitors of Src kinase. Dr. Seeliger’s laboratory at Stony Brook then determined the three-dimensional structure of these inhibitors bound to the Src kinase. This second step enabled the team to explain why the inhibitors work to stop the Src kinase but not the other kinases in cultured mammalian cells.

“Using this method, the precise molecular basis of the inhibitory mechanism and Src kinase are revealed,” says Dr. Seeliger. “These results provide new insights into the development of Src-specific inhibitors with potential therapeutic relevance.”

The research is funded by the National Institutes of Health (NIH). Dr. Seeliger continues to conduct his investigation on the molecular bases of Src inhibitors specifically for the development of new targeted cancer therapies. More broadly, Dr. Seeliger’s laboratory focuses on understanding the molecular mechanism of signaling proteins and how small molecule ligands and drugs can modulate their activity.