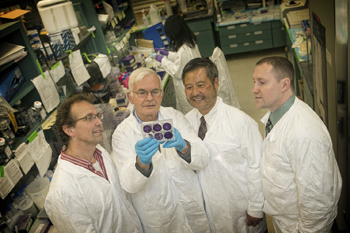 STONY BROOK, NY, January 31, 2013 – Stony Brook University has reached a research collaboration agreement with Janssen for the development of a new inactivated polio vaccine based on novel highly attenuated polio viral seed strains. These strains, when inactivated, have the potential to be as effective and as safe as the current inactivated poliovirus vaccine (IPV).

Distinguished Professor Dr. Eckard Wimmer and Research Assistant Professor Dr. Jeronimo Cello, from the Department of Molecular Genetics & Microbiology at Stony Brook University, both with extensive backgrounds in studying the poliovirus, developed the new seed strains for inactivated vaccine by genetically modifying the RNA of the wild-type poliovirus.

Poliomyelitis, in short polio, is a crippling, potentially fatal and highly contagious illness caused by poliovirus with no cure. According to the World Health Organization (WHO), the number of cases has fallen by more than 99 percent since the launch of the Global Polio Eradication Initiative (GPEI) in 1988, with three countries remaining polio endemic: Nigeria, Pakistan and Afghanistan. In 2012, there were 222 confirmed cases of wild type poliovirus, said Dr. Wimmer. The Independent Monitoring Board of the GPEI warned in a recent report that there is a significant risk of a resurgence of polio in 2013. “In spite of much progress, the virus still persists,” said Dr. Wimmer. “Development of a new vaccine is extremely important, particularly when the WHO ends all use of the oral (live) vaccine in the near future.”

Dr. Wimmer notes that currently, IPV is being produced from highly neurovirulent polioviruses. “As the demand for IPV will vastly increase in the future, production cannot be accomplished without risks from these virulent strains. Hence the call for novel attenuated seed viruses for IPV.”

According to Wimmer and Cello, the main property of these newly developed strains developed in Stony Brook is that they keeps the antigenic makeup of the wild-type viruses, but in contrast are void of their neurovirulence. “Our viruses have an important biosafety characteristic that safeguards the population,” said Dr. Cello.

“The new virus cannot make proteins as easily in neuronal cells,” said Wimmer. “When the virus gets recognized by the immune system it will induce a protective immune response as if this were the dangerous virus. If it were to get into the brain it doesn’t do any harm because of the modifications that we put into the RNA. Our vaccine candidates for IPV have the potential to be as good as the current inactivated poliovirus vaccine but without the dangers of the wild-type virus.”

“The poliovirus seed strains created by Dr. Wimmer and Dr. Cello have the potential to lead to a safer and more effective inactivated poliovirus vaccine. Such a vaccine will fill a critical need in achieving and maintaining global polio eradication,” said Benjamin Hsiao, Vice President for Research at Stony Brook University. “We are delighted to have the opportunity to partner with Janssen to bring this technology to market in the effort to eradicate this devastating disease.”

The research collaboration with Janssen is for two years with the option to extend. The project is currently in the development/preclinical stage. The agreement includes an option for an exclusive license under patents owned by Stony Brook. Financial terms of the agreement were not disclosed.


Dr. Wimmer and colleagues in the Wimmer Lab have made a number of breakthroughs in polio research, including:

• Synthesizing and generating wild-type poliovirus from its basic chemical components. To label the
synthetic virus, the team added into the viral genome “watermarks,” e.g., several single nucleotide
substitutions. One of the watermarks attenuated the virus neurovirulence in a murine model and is the
basis for development of the new novel vaccines. (2002 – Drs. Wimmer, Cello and Aniko Paul, Associate
Professor of Research, Department of Molecular Genetics & Microbiology at Stony Brook University)
• Wimmer, Cello and colleagues developed and tested a highly neuroattenuated poliovirus strain for the
treatment of the childhood cancer, neuroblastoma. The findings, published in Cancer Research, revealed
that the treatment with the attenuated form of poliovirus was effective in obliterating neuroblastoma tumors
and inducing tumor-specific immunity in mice. (March 15, 2007)
• Research published in the journal Science detailed how Dr. Wimmer and a team of molecular biologists
and computer scientists at Stony Brook designed and synthesized a new class of weakened polioviruses
as a path to a new vaccine. (June 27, 2008)