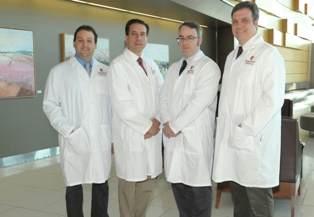 At right is Stony Brook University Hospital Trauma Surgeon James A. Vosswinkel, MD, who has been appointed Chief of the new Division of Trauma, Emergency Surgery and Surgical Critical Care, with, left to right: Daniel N. Rutigliano, DO, Michael F. Paccione, MD, and Steven Sandoval, MD, of the division.


STONY BROOK, N.Y., May 6, 2013 – Stony Brook University Hospital (SBUH) has formed a new Division of Trauma, Emergency Surgery and Surgical Critical Care to reflect its expert capacity to provide around-the-clock care for trauma and emergency surgery patients as a regional Level 1 Trauma Center. Stony Brook Trauma Surgeon James A. Vosswinkel, MD, was appointed Chief of the division in an announcement by Alexander B. Dagum, MD, FRCS(C), FACS, Interim Chair of the Department of Surgery at Stony Brook University School of Medicine and Chief of the Department of Plastic Surgery at SBUH.

The Division of Trauma, Emergency Surgery and Surgical Critical Care provides 24/7 care for trauma and emergency surgery patients and for patients in the hospital’s Surgical Intensive Care Unit (SICU), Dr. Dagum said. Previously, the hospital’s trauma/surgical critical care service was a section of the Division of General Surgery.


An Assistant Professor of Surgery at Stony Brook University School of Medicine, Dr. Vosswinkel has served as Director of the SICU at SBUH since 2008 and as Chief of the Section of Trauma and Critical Care since 2011. “As Director of the SICU, he has had an enormous impact on quality outcomes and reduced complications rates,” Dr. Dagum said. His clinical expertise includes traumatology, conventional and minimally invasive laparoscopic surgery, as well as the pre- and post-operative critical care of adult surgical patients.

Dr. Vosswinkel joined the faculty of the Department of Surgery in 2002. He received his medical degree from the SUNY Upstate Medical University, and completed his residency training in general surgery at Stony Brook. Subsequently, he completed a fellowship in trauma/surgical critical care at Yale University.

He is board certified in general surgery, surgical critical care and neuro critical care. In 2011, he was one of two physicians selected by faculty peers as a recipient of the Stony Brook University Physicians Award for Excellence in Clinical Practice.

“Our trauma service has been recognized by multiple state and federal healthcare agencies as providing among the highest level of care to injured patients in the country,” Dr. Dagum said.