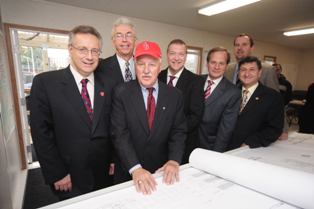 STONY BROOK, N.Y., September 28, 2012 – Stony Brook University hosted a groundbreaking dedication event for its new 70,000-square-foot Computer Science building on Friday, Sept. 28, continuing the expansion of the school’s nationally ranked Department of Computer Science and adding to its reputation as a rising star in the cutting edge research, education and industrial interaction essential to the innovation economy.

State Sen. Ken LaValle, who helped secure State funding through appropriation for the construction, was a special guest at the groundbreaking ceremony.

“This state-of-the art facility will ensure that students and researchers have access to the newest  technologies, reaffirm Stony Brook’s leadership role as a nationally ranked computer sciences center, bring new high paying technology jobs to our region and further establish Long Island as a magnet for innovation,” said Senator LaValle.

“The groundbreaking for this facility continues the University’s efforts to increase the number of computer scientists, engineers and researchers – clearly major areas that are key to the economy,” said Stony Brook President Samuel L. Stanley Jr., MD. “It solidifies Stony Brook’s position as the eminent computer science program in New York State, and will prepare a high quality of talented computer scientists who will be ready to contribute to the growth and development of this region, indeed to the entire state of New York.”

Stony Brook’s Department of Computer Science is one of the largest and fastest growing departments on campus, with 45 tenure-track and non-tenure-track faculty members, nearly 700 computer science and information systems undergraduate majors, and nearly 400 graduate students; a large number of non-majors are enrolled in computer science courses.

“As Provost, and as an Engineer by trade, I am especially proud that the Stony Brook University Computer Science Department, ranked among the top 20 departments in the nation by the National Research Council, is celebrating the groundbreaking of this new $40.8 million state-of-the-art facility,” said Dennis N. Assanis, Provost and Senior Vice President for Academic Affairs at Stony Brook University. “The excellence of Computer Science at Stony Brook, and our interdisciplinary collaborations, have placed Stony Brook at the cutting edge of Bioinformatics; smart energy, cyber security, and 3-D visualization across the engineering, physical sciences and biomedical fields. This new building will accelerate our growth in research and educational excellence in Computer Science at Stony Brook, and will help to further our mission as a public research university dedicated to educating and training a large proportion of the nation’s scientists and engineers.”

The new 70,000-square-foot building is designed to achieve a LEED Silver certification by the U.S. Green Building Council. Sustainable design elements include a storm water reclamation system that will capture enough rainwater to meet 100 percent of the building’s demand for potable water, serving efficient toilet fixtures, while reducing the resulting storm water runoff. The building includes a high-efficiency curtain wall system and passive solar shading louvers that, combined with high-performance mechanical and lighting control systems, will result in a 28 percent energy savings annually over a comparable building as required by the New York State Energy Code. Energy-efficient magnetic bearing chillers are used for comfort cooling, and close-coupled in-row cooling systems are utilized for the data centers to minimize overall transport energy. The use of artificial lighting will be minimized via the use of natural day lighting. Building materials produced locally with high levels of recycled content have been specified and only low-emitting paints, coatings, adhesives, sealants and flooring systems will be installed. It is anticipated that the project will recycle a minimum of 50 percent of construction and demolition waste, thereby diverting this waste from local landfills.

“This addition to the Computer Sciences Department represents another in a series of investments in computer science at Stony Brook, which have included the Center of Excellence in Wireless and Information Technology (CEWIT) building and the establishment of the new Institute for Advanced Computational Science and our collaborations in high performance computing with Brookhaven National Laboratory,” said Dean Yacov Shamash, Vice-President for Economic Development Dean of the College of Engineering and Applied Sciences.