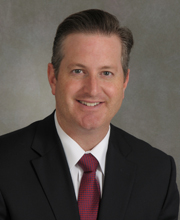 “Dr. Griffin is one of the finest clinician-educators at Stony Brook Medicine,” said Dr. Kaushansky. “His leadership as an innovator and educator of OB/Gyn services, as well as his dedication and hospital leadership role as Chief Medical Officer, make him well-suited to Chair the department.” He thanked Dr. Gerald Quirk, who led the department as Chair for the past 14 years, for his service in heading one of Stony Brook Medicine’s leading departments.

Dr. Griffin will continue the direction of Dr. Quirk’s leadership by growing the department’s clinical excellence and spearheading new teaching initiatives for the department’s medical students, 20 residents and four fellows. Dr. Griffin has served on staff at the hospital and on the medical school faculty for more than a decade, where he has made his mark as a clinician, educator and leader. He also serves as Chief Medical Officer, Stony Brook University Hospital, and as Fellowship Director of the Minimally Invasive and Robotic Gynecological Surgery Program.

With expertise in robotic gynecologic surgery, Dr. Griffin has educated and trained a large number Stony Brook and community physicians in this new surgical modality. His efforts have expanded the department’s clinical capabilities in robotic gynecological surgery. Since 2007, Dr. Griffin has led an experienced team in using robot-assisted technology to remove fibroids, perform hysterectomies and uterine prolapse surgery, and treat uterine and cervical cancer. He is also one of the few surgeons in the region to offer these techniques for cerclage to prevent miscarriage.

A recognized leader in obstetric and gynecologic medicine, Dr. Griffin serves on the Medical Leadership Council of the University HealthSystem Consortium, the Chief Medical Officer’s Group and its Leadership Committee of the Association of American Medical Colleges, and the Solvay Scholars Program of the Association of Professors in Gynecology and Obstetrics (APGO). He himself was a Solvay Scholar – an intensive fellowship experience that prepares participants to become outstanding teachers and leaders in the field – in 2005-2006.

Dr. Griffin has also garnered national recognition for teaching excellence. He has received the APGO Excellence in Teaching Award three times, and the National Faculty award of the Council on Residency in Obstetrics and Gynecology. In 2007, he was selected and currently serves as a National Oral Board Examiner for the American Board of Obstetrics and Gynecology. In 2008, he received the School of Medicine’s Aescalapius Award, the institution’s highest award for teaching. He has served as Residency Program Director and a Research Mentor for the residency program.

Dr. Griffin joined Stony Brook as a Clinical Assistant Professor of Obstetrics, Gynecology and Reproductive Medicine in 2000. Prior to that, he served as a Lieutenant Commander in the United States Navy. As head of the Department of Obstetrics and Gynecology at Naval Hospital 29 Palms in California from 1997 to 2000, he received both the Outstanding Obstetrical Care and Outstanding Gynecologic Care awards from the Department of Defense.