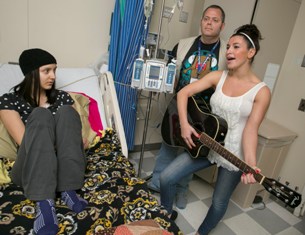 STONY BROOK, N.Y., June 18, 2013 — Every Friday afternoon, one of the best shows in town has been held not at Jones Beach Theater or the Nassau Coliseum, but on the 11th floor of Stony Brook Children’s Hospital. That’s when 47-year-old Mark Klein of West Babylon turns the Pediatric Oncology and Hematology unit into both a stage and a wandering minstrel show.

For the past two and a half years, Klein, who hosts a radio show on Fridays from 8 to 10 AM on WUSB 90.1 FM at Stony Brook University and an internet show at www.liblues.com, has brought some of the best musicians working today in the New York area — including Harry Chapin’s daughter and members of the bands of Billy Joel and Jennifer Lopez and Marc Anthony — to play and sing for hospitalized children.

Children who can leave their rooms get to attend the concerts in the hospital’s playroom. Those who are bedbound have the option of a private performance in their rooms, where the musicians will perform two or three requests. Their favorite requests? “Beatles, Elton John and the Eagles — the music the kids hear at home,” Klein said.


On June 14, Leah Laurenti, a two-time American Idol contestant from Medford, entertained children in the playroom. “It’s just a really good way to give back,” Laurenti said. “It’s nice to sing for the children and their families. It’s nice to give the kids a chance to hear the music and take their minds off their situation for a while.”

Kyle Wollman, age 9, a student at Winona Elementary School in Lake Ronkonkoma, enjoyed Laurenti’s performance. “It was good,” said Kyle, who added that the music made him feel happy.

“It was great,” said his father, Todd Wollman. “She did a great job. It’s nice to see that the hospital does things like that.”

“It’s really nice,” said 17-year-old Rachel Ragone, who was entertained in her hospital room, accompanied by her parents John and Kim Ragone of Manorville. She said she has heard musical acts at the hospital several times. “It’s refreshing and everyone’s a really good singer.”

Klein calls Fridays the best part of his week. And so do the staff and patients at Stony Brook Children’s. Children who are undergoing long hospitalizations look forward to Friday afternoons. Often the nursing staff will schedule their shifts around the musicians’ visits, so they can enjoy the spectacle and entertainment as well.
“We find music to be a healing experience for the patients, often helping them to express feelings and relax,” explains Paulette Walter, MA, Certified Child Life Specialist.

The music program evolved out of several of Klein’s twin interests: a love of children and a desire to help people with cancer, since the disease has hit his own family hard over the years. He realized he had a goldmine of musician contacts from the radio show, so he brought the idea of bringing performers to the children’s hospital. It was approved in January 2011, and ever since, the halls of Stony Brook Children’s echo with music on Fridays.

“This program highlights the deep connection between Stony Brook Children’s and our community,” says Margaret McGovern, MD, PhD, Physician-in-Chief of Stony Brook Children’s. “Music has healing properties and engages children in a way that words cannot. We welcome people like Mark who can share their unique talents and make a difference for our patients.”

Even though the musicians play at the hospital on a volunteer basis, Klein has a backlog of performers eager to get involved. The schedule is booked three months out, and a different singer, duet or trio performs each week. Particularly successful acts get invited to play several times a year.

“We love it because we can see the power of live music,” Klein said. “Mothers often pull me into the hall in tears to tell me that this was the first time their child smiled all week. Nurses have told me that while electronically monitoring the brain waves of some the children in the intensive care unit, they can see a positive shift while the music was playing. This is absolutely why we do it.”

Established in June 2010, Stony Brook Children’s is Suffolk County’s only children’s hospital. More than 7,000 children and adolescents are admitted each year. Stony Brook Children’s operates 100 pediatric beds and has more than 140 full-time pediatric physicians and surgeons in 30 different specialties and over 200 voluntary pediatric faculty members. The hospital is the Level 4 Regional Perinatal Center for our area and has a Level III Neonatal Intensive Care Unit. It is home to the nation’s first Pediatric Multiple Sclerosis Center and also offers a Pediatric Hematology/Oncology Program, Pediatric Cardiology Program, Pediatric HIV and AIDS Center, Cystic Fibrosis Center and the Cody Center for Autism and Developmental Disabilities. To learn more, visit www.stonybrookchildrens.org.