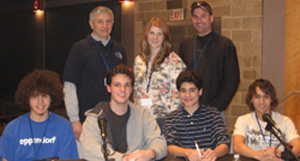 Winning team members awarded $1,000 each and a trip to Washington, D.C.


After many rounds of competition between the 16 participating teams from across New York, Longwood High School, St. Anne’s School, and Mt. Sinai High School had each lost only a single round, and last year’s Bay Scallop Bowl winner, Churchville-Chili High School, was undefeated.

In round 9, St. Anne’s faced Longwood for a chance to progress to the finals. Longwood squeaked past St. Anne’s and eliminated them from the competition by correctly answering a bonus question to put Longwood ahead just as time expired. In round 10, Longwood lost a tough match to Mt. Sinai.

Mt. Sinai, whose one loss of the day was to Churchville-Chili, faced that team again in round 11. Mt. Sinai dominated the round, forcing a final round to decide the winner. Despite earning zero points in the first buzzer round, Churchville-Chili performed well in the team challenge questions and surged in the second buzzer round.  However, Mt. Sinai’s initial lead proved to be insurmountable. The final score was Mt. Sinai 66, Churchville-Chili 52.

“The competition was intense,” said Mt. Sinai team captain Matthew Clark. “We had a lot of close matches.”  Clark explained that after their loss to Churchville-Chili, his team had a meeting and devised a secret new team strategy. “I think getting knocked into the one-loss bracket actually helped us. It forced us to keep playing instead of resting, and enabled us to build up momentum.”

“There are lots of good teams here,” said Churchville-Chili team captain Patrick  Chamberlain. “We consider our day successful if we make it past round five.”

“The knowledge of oceanography and marine biology displayed by these high school students is truly astounding. It is a testament to the coaches who did an excellent job of preparing their teams for the competition,” said David Conover, Dean of the School of Marine and Atmospheric Sciences. “We hope this experience will inspire some of these students to choose a career in marine science.”

At the concluding ceremony, William Wise, Bay Scallop Bowl Coordinator, thanked his co-Event Coordinators, Kim Knoll and Tara Duffy, as well as the army of volunteers that made this event possible. “I think we succeeded in our goal to make this event purposeful and fun,” he said