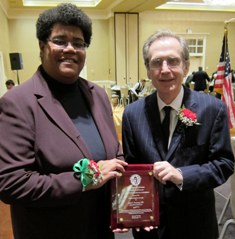 Dr. Pomeroy was honored for his work with special needs children, said Florence Joyner, chairperson of the luncheon. “He has worked tirelessly to develop services for children and adults with autism spectrum disorders at Stony Brook and advocated for the local development of school programs and improved clinical services,” she said.

Dr. Pomeroy is Associate Professor of Pediatrics & Psychiatry at Stony Brook University School of Medicine, Head of Division of Developmental Disabilities, and Founding Director of The Cody Center for Autism and Developmental Disabilities at Stony Brook Children’s Long Island Children’s Hospital. He has served as Director of The Cody Center since its opening in 2001 and joined Stony Brook as the first faculty member in the Division of Child Psychiatry.

In 1997, Dr. Pomeroy formed the Division of Developmental Disabilities within the Psychiatry Department at Stony Brook in collaboration with Lynda Geller, PhD. In 2001, with major philanthropic and University support, including a gift of $2.5 million from Matt and Debra Cody of Port Jefferson, NY, The Cody Center for Autism and Developmental Disabilities opened with Dr. Pomeroy serving as its Director. The Cody Center is now a division of the Department of Pediatrics at Stony Brook Long Island Children’s Hospital.

“John has led a rapid expansion of clinical and community services for Autism and developmental disabilities at Stony Brook,” said Margaret McGovern, MD, PhD, Professor and Chairman, Department of Pediatrics, Stony Brook University School of Medicine, and Physician-in-Chief, Stony Brook Long Island Children’s Hospital. “Not only is he a leader in his clinical field, he has been an outstanding public servant and advocate for children with autism.”

Dr. Pomeroy’s interest in the broader diagnostic concept of autism dates back to projects he began as a resident at the University of Iowa. In 1984, he received the J. Franklin Robinson Award from the American Academy of Child and Adolescent Psychiatry. He has been the author of more than 70 articles, abstracts and book chapters, with an emphasis on two fields of interest: (1) diagnostic sub-typing of the autism spectrum and (2) the diagnosis and treatment of emotional/behavioural disorders in individuals with cognitive or developmental disabilities.

In addition to his research interests, he has developed a broad range of clinical and training programs. In the 1990s, he received funding from New York State to develop a continuum of psychiatric care for dually diagnosed (MH/MR) individuals on Long Island, and for a fellowship training program for child and adolescent psychiatrists to specialize in the diagnosis and treatment of individuals with dual diagnosis. More recently, he served as a principal collaborator in the formation of the Downstate Center of Excellence for Dual Diagnosis, a consortium of 30 agencies created to enhance staff training and expertise in recognition and management of mental disorders in persons with mental retardation or developmental disabilities. Initial funding was provided by the New York State Developmental Disabilities Planning Council.

Dr. Pomeroy received his medical degree from the University of London in 1973. He is a Fellow of the American Academy of Child and Adolescent Psychiatry. In 2009, he was named 2009 Health Care Professional of the year by the Mental Health Association in Suffolk County and received the Physician of Distinction award from the Nassau Physicians Foundation.

Established in June 2010, Stony Brook Long Island Children’s Hospital is Suffolk County’s only children’s hospital. More than 7,000 children and adolescents are admitted each year. Stony Brook Children’s operates 100 pediatric beds and has more than 140 full-time pediatric physicians and surgeons and over 200 voluntary pediatric faculty members in 30 different specialties. The hospital is the Level 4 Regional Perinatal Center for our area and has a Level 3 Neonatal Intensive Care Unit. It is home to the nation’s first Pediatric Multiple Sclerosis Center and also offers a Pediatric Hematology/Oncology Program, Pediatric Cardiology Program, Pediatric HIV and AIDS Center, Cystic Fibrosis Center and the Cody Center for Autism and Developmental Disabilities. To learn more, visit www.stonybrookchildrens.org.

The New York Suffolk County Martin Luther King, Jr. Commission and Institute for Nonviolence is a public entity promoting knowledge through formal and informal educations, training and assistance to involve youth and adults of all cultures in the commemoration, preservation and application of the philosophy, techniques and practice of nonviolence in their daily encounters at home, work and in their communities at all levels to promote the goal of Dr. King’s “Beloved Community” through elimination of the social ills of racism, poverty, militarism and all forms of violence, and the attainment of social justice through nonviolent means.