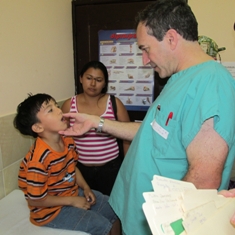 Dr. Alexander Dagum examines a boy with a cleft lip during the medical mission to Ecuador.

STONY BROOK, NY, October 26, 2012 – A team of surgeons from Stony Brook Medicine participated in a medical mission this month to Guayaquil, Ecuador, where they completed 75 life-transforming procedures for both adults and children. The procedures included hernia repairs, gallbladder removals, and repairs of cleft lips, palates, and burn scars. The team joined the 80-plus healthcare volunteers who work at a mission in Ecuador sponsored by Blanca’s House that provides free care to those in need.

“Most of the children we cared for and their families would not normally have access to high quality 21st century medicine, and it is thrilling to be able to help them and change their lives forever,” said Dr. Dagum, Interim Chair of the Department of Surgery, Professor of Surgery and Orthopaedic Surgery, Co-Director of the Cleft Palate Craniofacial Center, and Chief of Plastic and Reconstructive Surgery at Stony Brook University School of Medicine.

Dr. Dagum, a veteran of many medical missions to third world countries, pointed out that thousands of children in developing nations each year never receive the proper treatment or corrective surgery for conditions such as burns and congenital deformities. Such missions give them the chance to be treated by state-of-the-art medical practices in their homeland.

Volunteer organizations such as Blanca’s House, he added, provide the opportunity for physicians and other healthcare specialists in the United States to share their expertise with healthcare professionals in developing nations. Together, they deliver the necessary services and procedures to those who normally do not have access to them.

The mission to Ecuador also provided Dr. Dagum and his colleagues with a unique setting to further educate and train residents on the latest practices and techniques in general and plastic surgery. Led by Dr. Dagum, the Stony Brook plastic surgery team completed 25 procedures, including ones for burn scars, cleft lip and palates, and other congenital deformities. Dr. Scriven led the Stony Brook general surgery team that completed 50 overall procedures, including 22 gallbladder removals by way of minimally invasive laparoscopic surgery.

The overall number of patients who received care during the Blanca’s House mission to Ecuador totaled 225. For more information about the procedures completed and services donate, see this Blanca’s House webpage.