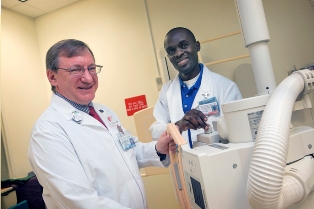 
STONY BROOK, NY, June 10, 2013 – Johnson Bakalikwira dreams big. The Uganda native and Radiologic Technology student in the School of Health Technology and Management at Stony Brook University has set three ambitious goals for himself: develop leadership skills, get a world-class education, and reform medical imaging technology in a third-world nation.

Two of those goals will be accomplished later this month: Between June 13 and 16, he will be in Albuquerque, New Mexico, participating in the American Society of Radiologic Technologists (ASRT) Student Leadership Development Program. Johnson is one of 61 students — and the first Stony Brook student ever — to be selected for that honor. Then on June 28, he is graduating from Stony Brook’s post-baccalaureate clinical program in Radiologic Technology.

As for that third goal? It’s in the works.

It’s been said that when life hands you lemons, make lemonade. In Johnson’s case, the lemons are bananas. Because his parents could not afford to pay for Johnson’s education, his uncle, who owns a transport company, offered to do so if Johnson worked for him. In 2005 Johnson and his brother Michael were traveling through Uganda’s Mbarara district in their uncle’s truck loaded with matooke (green bananas). The two were en route to market when a cow ran into the road. Michael, who was driving, lost control of the vehicle and crashed. The next thing Johnson remembers was waking up in a hospital bed.

The accident left Johnson with two fractured legs and his brother with a dislocated hip, but the pain from those injuries was no match for what was yet to come. The brothers soon learned that although health services are free in Uganda, there is a price to be paid — literally — for quality care.

Only patients who paid “bribe money” to the x-ray technicians received needed imaging services, Johnson said. “Patients without money would stay for weeks in the hospital without x-rays ever being done, and given the large volume of patients coming in everyday, no one seemed to care about those who had been there a long time,” he said. “It was painful to watch some patients end up disabled simply because an x-ray was not done.”

The brothers were hospitalized for nearly four weeks. Because they were not diagnosed properly, they were left with misaligned bones. In the case of Johnson’s brother, the accident left him with a permanent disability — one of his legs is noticeably shorter than the other.

“After that experience in the hospital, I promised myself that when the time was right and I had the resources, I would go back to school, pursue a career in medical imaging and promote reform in this field in Uganda,” Johnson said.

After recovering from the accident, Johnson moved to Uganda’s capital city of Kampala to live with a cousin and volunteer at The AIDS Support Organization, during which time he received a certificate in AIDS/HIV counseling. In early 2007, after a three-year wait, he was granted permission from the American government to attend school and work in the United States.

He moved to America in mid-September 2007, enrolling at the City University of New York a year later. At a local church group he quickly became friends with a Nigerian national, Ugonna Iroku, MD, who graduated from Stony Brook in 1997 with a BS in pharmacology. Dr. Iroku praised Stony Brook’s program in Radiologic Technology and persuaded Johnson to enroll in it. In summer 2010, on Dr. Iroku’s recommendation, Johnson transferred to Stony Brook.

He could not be happier about that decision. “Stony Brook’s Radiologic Technology Program has prepared me to meet different challenges as I enter the job market,” he said, explaining that what sets Stony Brook’s program apart from those of other schools is its rigorous curriculum.

“During our fifth year, which is called the clinical year, we spend most of the time doing rotations in different hospitals, applying what we learned in senior year,” Johnson said. But it was when he was working side by side with students from other schools during those rotations that Johnson realized just how much more he learned at Stony Brook.

“One time an orthopedic surgeon ordered a post-surgery x-ray of a hip and knee from a patient who was not supposed to be moved. A student from another school was assigned to perform the x-ray but did not know how to shoot cross-table images without moving the patient. He came to me and I showed him how to do it,” said Johnson. “Knowing that I already learned how to do that type of imaging study at Stony Brook makes me very proud of my school.”

That pride reflects in Johnson’s positive attitude, according to Joseph Whitton, a clinical assistant professor and director of the Radiologic Technology Program.

“Johnson demonstrates a true passion for his education and the opportunity to become a healthcare professional,” Whitton said, adding that he encouraged Johnson to apply for the ASRT program. In a poignantly written essay, Johnson detailed his experiences with healthcare and his desire to make a difference in his native country, which caught the attention of ASRT’s admissions committee, resulting in Johnson’s acceptance into the leadership program.

“I was keenly aware that this program could be a great asset to him as he strives to attain his goal of bringing improved medical imaging services to his home in Uganda,” Whitton said.

While participating in the ASRT program, Johnson will be assigned a mentor, engage in educational activities, network with radiology leaders, and learn from seasoned radiologic technologists.

“This program will give me a clear and concise understanding of the medical imaging profession and educate me on different techniques in my field, which will help me when I return to Uganda,” he said.

He added that he wants to establish an imaging center in Uganda that would promote patient safety and employ people only with the requisite educational skills.

Johnson said he had planned to return to Uganda right after graduation to lay the foundation for the plan, and had contacted an organization in the United Kingdom that donates used equipment to African nations. Unfortunately, a shortage of imaging equipment means that his proposal is on hold at this time, but he is not deterred by that setback. Instead he is giving himself five years to achieve his goal.

“With the network of people I have been meeting plus my contacts at Stony Brook and my association with ASRT, I remain hopeful that all the discussions that I will continue to have will help me when I propose my idea to the Ugandan government,” he said. “And I am optimistic that it will be receptive to implementing my model, especially as the field of imaging advances in technology.”