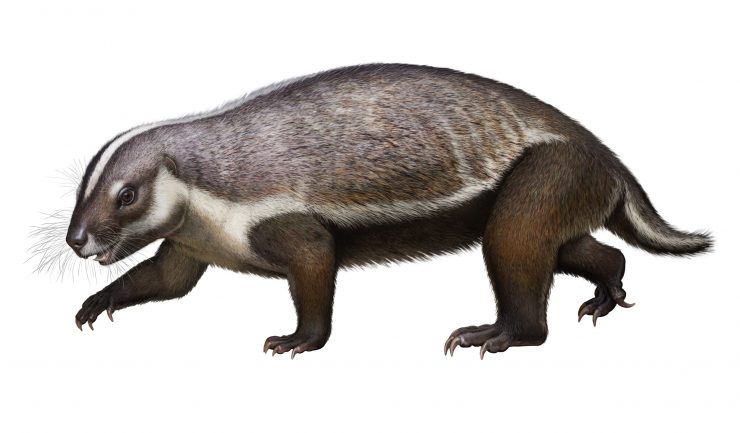 Blockbuster discovery announced in Nature paper, co-authored by Stony Brook’s James Rossie, of a bizarre opossum-sized mammal that lived among dinosaurs, massive crocodiles, and snakes on the island of Madagascar has researchers baffled

(Stony Brook, Long Island, April 29, 2020):  In evolutionary terms, islands are the stuff of weirdness. It is on islands where animals evolve in isolation, often for millions of years, with different food sources, competitors, predators, and parasites…indeed, different everything compared to mainland species. As a result, they develop into different shapes and sizes and evolve into new species that, given enough time, spawn yet more new species.

Such is the case with the discovery of a new, bizarre 66-million-old mammal in Madagascar by a team of international researchers led by Dr. David Krause, senior curator of vertebrate paleontology at the Denver Museum of Nature & Science and professor emeritus at Stony Brook University, where part of the research was done.  The discovery of this opossum-sized mammal that lived among dinosaurs and massive crocodiles on the fourth largest island on Earth was announced today in the journal Nature.   Dr. James B. Rossie of Stony Brook University is one of the study’s co-authors.  The late Yaoming Hu of Stony Brook University was also a co-author.

Krause said that, “knowing what we know about the skeletal anatomy of all living and extinct mammals, it is difficult to imagine that a mammal like Adalatherium could have evolved; it bends and even breaks a lot of rules.”

In fact, although a life-like reconstruction might lead one to think that Adalatherium was a run-of-the-mill badger, its “normality” is literally only skin deep.  Below the surface, its skeleton is nothing short of “outlandish.” It has primitive features in its snout region (like a septomaxilla bone) that hadn’t been seen for a hundred million years in the lineage leading to modern mammals.

“Its nasal cavity exhibits an amazing mosaic of features, some of which are very standard for a mammal, but some that I’ve never seen in anything before,” Rossie declared.

The teeth of Adalatherium are vastly different in construction than any known mammal. Its backbone had more vertebrae than any Mesozoic mammal and one of its leg bones was strangely curved.

Adalatherium belongs to an extinct group of mammals called gondwanatherians because they are only known from the ancient southern supercontinent of Gondwana. Gondwanatherian fossils were first found in Argentina in the 1980s but have since also been found in Africa, India, the Antarctic Peninsula, and Madagascar. Gondwanatherians were first thought to be related to modern-day sloths, anteaters, and armadillos but “now are known to have been part of a grand evolutionary experiment, doing their own thing, an experiment that failed and was snuffed out in the Eocene, about 45 million years ago,” Krause explained.

The fossil record of early mammals from the northern hemisphere is roughly an order of magnitude better than from the south.

The new Adalatherium mammal is just the latest of a series of bizarre back-boned animals discovered by Krause and his research team on Madagascar over the past 25 years.  Earlier discoveries have included a giant, armored, predatory frog (Beelzebufo), a pug-nosed, vegetarian crocodile (Simosuchus), and a small, buck-toothed dinosaur (Masiakasaurus).

The island itself is filled with animals (and plants) found nowhere else on the planet, including hissing cockroaches, giraffe weevils, tomato frogs, Satanic leaf-tailed geckos, panther chameleons, and streaked tenrecs to name a few. And, of course, there is the signature group of mammals – lemurs – made famous in the animated “Madagascar” movies.  Only a few thousand years ago, the Madagascar fauna also included 1400-pound elephant birds, gorilla-sized lemurs, and pygmy hippopotamuses.