Workers from six contractor companies present $1,250 check, honor LAF founder, Jenny Tranfaglia for her work with parents and families in the NICU 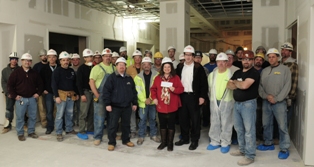 STONY BROOK, NY, December 22, 2010 – Unbeknownst to them, a gift from the construction crews working on Stony Brook University Hospital’s Major Modernization Project would have a very special meaning to its beneficiary – Jenny Tranfaglia and her organization, the Little Angel Fund. They presented a check to Jenny and the Little Angel Fund for $1,250  on December 14th, one day before the 27th anniversary of the birth of her daughter, Amanda Rose. Amanda was born 16 weeks premature, and did not survive, and that’s when Jenny and her husband Joe started the Little Angel Fund to support families who are going through what they went through in the SBUH Neonatal Intensive Care Unit all those years ago.

The fundraising effort began on October 1 – the annual Safety Awareness Day for the MMP – when Gilbane Building Company, the general contractor on the project since 2002, got together with its subcontractors including EW Howell, B&G Electric, Henick-Lane, Botto Mechanical, A&F Fire Protection Systems and Construction Consultants, which are working on the CPEP Annex, to initiate the fundraising effort. Because they were working on the NICU area of the Major Modernization project at the time, William Ford, project executive supervising the MMP for Gilbane Building Company, asked NICU leadership how the crew could help the NICU families; it was then they learned about the Little Angel Fund.

“The guys are very happy to be here today, to hear the story of the Little Angle Fund and what the Tranfaglia family has been through, and how they have risen above for the benefit of others,” said Ford. “We are pleased to be able to support this important cause today.”

Jenny and Joe’s daughter Amanda lost her struggle 33 days after birth, and as they grieved, the Tranfaglias vowed to “make life a little easier and more comfortable for the premature and seriously ill infants and their families, while they are in a Neonatal Intensive Care Unit, after they graduate from the NICU and to act as a source of help and support for the bereaved. We are dedicated to supporting, educating and caring throughout the NICU experience,” and did so by starting the LAF.

For more information, visit Little Angle Fund; and visit Walk For Babies to register for the annual walk, this year taking place at Stony Brook University on May 1, 2011.