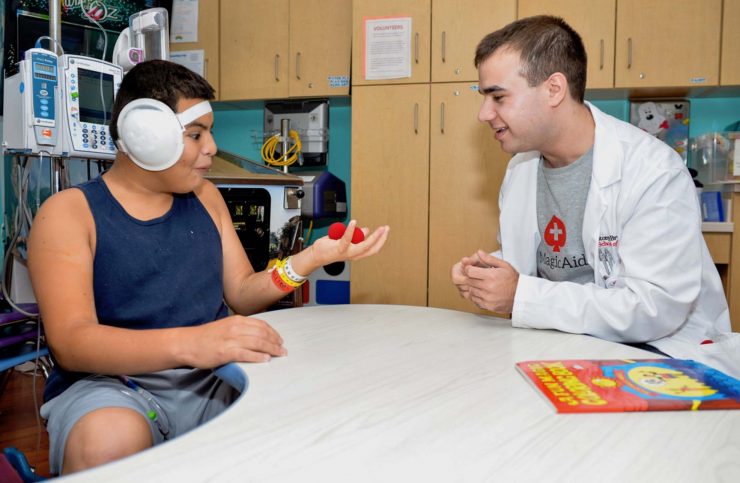 STONY BROOK, NY, November 1, 2019 – The experience of stress and fears upon hospitalization is frequent with pediatric patients. A new study of pediatric patients at Stony Brook Children’s Hospital reveals that a program called MagicAid helps significantly reduce both patient and caregiver (parent) anxiety by about 25 percent. The findings, to be published in Hospital Pediatrics, suggest that a magic therapy program for pediatric inpatient care may have great value to patients and caregivers while hospitalized and should be considered to be implemented in this setting.

MagicAid magic therapy, is an interactive therapy that uses magic tricks and magic sessions designed to alleviate patient anxiety. MagicAid is a non-profit organization co-founded by Harrison Pravder, a fourth-year medical student at the Renaissance School of Medicine at Stony Brook University. The program is run at Stony Brook Children’s under the guidance of professionals in the Child Life Program.

“It is important to develop tools to facilitate coping and encourage distraction for patients due to anxieties associated with hospitalization,” said Pravder. “Anxiety often arises due to loss of self-determination and separation from home and family in patients, while, for parents, stress is often related to their child’s hospitalization and other concerns such as financial costs, and this stress can translate back to the child.”

Pravder and his colleagues found a majority of patients and parents to be receptive to magic therapy and willing to participate. They evaluated 100 inpatients ages 5 to 16 years and 90 caregivers at Stony Brook Children’s. Patient-caregiver pairs were randomly assigned to a magic therapy intervention group or control group. The magic therapy included a session of watching magic, learning how to perform a magic trick, and receiving a magic prop to practice in order to perform for others.

Anxiety was measured before and after the magic interventions by using validated self-report tools. These included a facial image scale and the venham picture test for younger patients and for older children a pictoral scale and a written scale signifying anxiety levels. Caregivers’ anxiety level was evaluated using only the written linear scale, called the short State-Trait Anxiety Inventory (STAI).