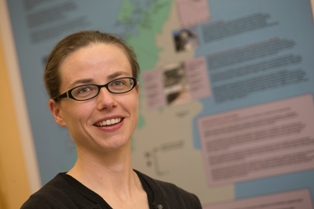 STONY BROOK, NY, April 30, 2013 – Heather Lynch, PhD, an Assistant Professor in the Department of Ecology and Evolution at Stony Brook University was selected to receive the National Science Foundation’s (NSF) prestigious Faculty Early Career Development (CAREER) program award for her work entitled, “The Use of Quantitative Geography to Predict Population Tipping Points for Colonial Seabirds.” The project, a five-year $782,839 award, is being jointly funded by Geography and Spatial Sciences and the Office of Polar Programs. Professor Lynch joins four other Stony Brook University professors that have been award NSF CAREER Awards in 2013.

Professor Lynch’s research area is quantitative population ecology, with a particular focus on using mathematical and statistical models to understand the spatiotemporal (space and time) dynamics of Antarctic penguin populations. She is co-PI of a long-term biological monitoring program called the Antarctic Site Inventory, a project she runs with Oceanites, a Washington, DC, based non-governmental organization. Most recently, Professor Lynch has been at the forefront of using high resolution commercial satellite imagery to map the presence and abundance of Antarctic seabirds, an area of interest which has exploded in recent years.

“The NSF CAREER Award is one of the highest honors a young faculty member can achieve,” said Stony Brook University President Samuel L. Stanley Jr., MD. “The funding provided through this award truly helps rising stars like Professor Lynch, who demonstrate great promise through their innovative research interests and as dedicated educators.”

“High resolution commercial satellite imagery represents a real game-changer in terms of our ability to study the spatial ecology of penguins and other seabirds,” said Lynch. “It is now possible to map nesting penguins nearly to the scale of individual nests, and to do so over their entire global range. Not only can we document where penguins are breeding but for the first time we can comprehensively map all the places they are not breeding, the latter of which has been a real sticking point for most studies of biogeography.”

This CAREER Award will enable Professor Lynch to move beyond the technical issues associated with the remote sensing of penguins to develop mathematical models of their spatial population dynamics. It will also allow her to hire postdoctoral researchers in both remote sensing and applied mathematics. “Having that kind of interdisciplinary team to work with is one of the things I’m most excited about,” Lynch said.

“I’m fascinated by the idea that colonial seabirds may struggle to shift their breeding range in response to climate change because of the population dynamics associated with having to breed colonially,” Lynch said. “My work has always been driven by an interest in the spatiotemporal dynamics of populations, and in that sense it spans mathematics, ecology and geography. This project brings together all of those disciplines to answer some really fundamental questions about how colonial seabirds will adapt to climate change.”

The project is also centered on the development of secondary school earth and environmental science learning modules that integrate geography, geospatial technologies and virtual access to Antarctica into a framework for teaching key components of the NYS Core Curriculum for science. This aspect of the work will be a collaboration with Stony Brook’s Center for Science and Mathematics Education (CESAME), whose guidance, Lynch said, was critical to the development of the proposal. The project also includes paid summer internships for high school students who will have the opportunity to conduct independent research on Antarctic biogeography as part of New York State’s “Science Research” curriculum.

Professor Lynch received an AB in Physics from Princeton University, an MA in Physics from Harvard University, and a PhD in Organismic and Evolutionary Biology from Harvard University. She has published 28 peer-reviewed articles (click here for a summary), one book, and a chapter on the gentoo penguin in the recently released book Penguins: Natural History and Conservation. In addition to her scientific writing, Professor Lynch has written for and lectured extensively to the general public, and has been actively involved in Antarctic policy and management, including co-authoring eight Information Papers submitted by the United States to the Antarctic Treaty Consultative Meeting.