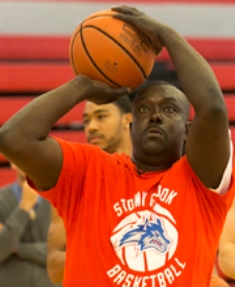 STONY BROOK, NY, October 16, 2012 – Arthur Plowden, 45, of Amityville, N.Y., says he is “living a dream every day and feeling better than ever.” In April, 2010, Plowden became the first patient at a Long Island hospital and at the Stony Brook University Heart Institute to receive a life-saving left ventricular assist device (LVAD). The device transformed his life, which dramatically changed again in July 2012 when Plowden received a new heart at one of Stony Brook’s heart transplantation partners, Montefiore Medical Center, Bronx, N.Y. When Stony Brook Seawolves Men’s basketball Head Coach, Steve Pikiell, heard Plowden’s story and about his dream to play on a basketball court again, he invited him to a pre-season shooting session.

On October 11, at the Pritchard Gymnasium in the Stony Brook University Sports Complex, Plowden came ready to play – decked out in a dark sweat suit and shiny green sneakers. Coach Pikiell invited him to play a game of “HORSE” with the team, after which he and his players presented Plowden with a signed basketball, a Seawolves shirt, and two 2012-13 season tickets. Coach Pikiell also invited Arthur to spend a game on the bench with the team during an upcoming game.

“Your story is truly inspiring, and it moved this team to invite you to shoot with them and play on a basketball court again,” said coach Pikiell, presenting Plowden with the gifts. “Some of our players have overcome obstacles in life. If they have a bad day or are having a hard time with something, I will remind them of your story and all that you were able to overcome, and that will give them new perspective.”

Plowden, energetic and animated, thanked the coach, players, and his caregivers, the specialists at the Stony Brook Heart Institute’s Ventricular Assist Device (VAD) Program. He surprised everyone when he said he was a big Seawolf fan, showed the team pictures of “Wolfie” the Seawolves’ mascot on his phone, and told them that his nephew, Mitchell Beauford, played for the Seawolves basketball team from 2003-08.

“To see how far Arthur has come is really quite incredible,” said Hal Skopicki, MD, PhD, Assistant Professor of Medicine, Director of Heart Failure Program, and Co-Director of the VAD Program at the Stony Brook Heart Institute. “By 2010, Arthur had end stage heart failure with his heart functioning at only 10 percent of normal. Since then, Arthur has gone from a condition that made getting out of bed nearly impossible to being able to play his favorite sport almost without limitation.”

“I am so proud of Arthur, and the way he returned to doing the things he loves to do shortly after his LVAD implantation,” said Allison McLarty, Associate Professor of Surgery, Co-Director of the VAD Program, and the cardiothoracic surgeon who implanted the device in Plowden. “He lives life with a lot of enthusiasm, hope, and energy, which has increased 10-fold as he has gotten healthier. His story has been an inspiration to us and to all of Stony Brook Medicine’s LVAD patients.”

While Plowden’s journey with heart disease began as a teenager, he remained physically active and without significant problems until his late thirties. Then one day in 2006 he woke up and felt a little uncomfortable with congestion, as if he had a cold. He decided to go to a basketball court to shoot some hoops, and, he explains, “to get myself going and maybe clear out the congestion.”

That day he collapsed on the basketball court. It was determined that he had heart failure, and, after seeing a series of cardiologists and becoming progressively weaker over the next two years, he sought out the advanced cardiac program at Stony Brook Medicine and Dr. Skopicki.

Seeing his condition rapidly deteriorating in early 2010, Dr.Skopicki and colleagues looked for new treatment options. After weeks of intensive evaluation, Drs. Skopicki and McLarty determined that Plowden was a candidate for LVAD implantation.

“I did not want to collapse again, and die on the spot,” said Plowden. “So I told the doctors to go for it and they successfully implanted the LVAD, which worked great for me for more than two years; and look at me now.”

The LVAD and other heart-assist pumping devices represent a new generation of heart technology. The LVAD is attached to the heart and aorta to assist in pumping the heart’s left chamber. It is considered by heart specialists as an intermediary device – crucial as a ‘bridge to transplant’ – for patients before heart transplantation, as in Plowden’s case, or for long-term use in patients who are not heart transplant candidates.

The VAD Program at the Stony Brook Heart Institute has been in operation in 2010. Plowden was the first heart failure patient at Stony Brook to receive an LVAD when it was implanted on April 6, 2010. To date, 17 Stony Brook patients have received LVAD.

Plowden is the first Stony Brook patient to also bridge successfully to a heart transplant. The availability of a heart came up suddenly. He received a call on his cell phone during the evening of July 2 from Kathleen Lopez-Newton, NP, and the Stony Brook VAD Program Coordinator. She had communicated moments before with a coordinator at Montefiore Medical Center, who informed her of the heart designated for transplant and a match for Plowden. In Delaware at the time, Plowden rushed directly to Montefiore, where he had the transplant the following morning.

“It’s all systems go for me now,” exclaimed Plowden as he talked about his active life. “I am back to my job landscaping, I fish all the time, and it felt unbelievable to be back on the hardwood court again.”