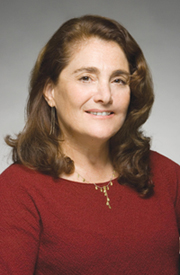 STONY BROOK, NY, January 27, 2012 – Lorna Role, PhD, professor and chair of the Department of Neurobiology & Behavior, co-director of theInstitute for Advanced Neurosciences and member of the Central Nervous System Disorders Center in the Centers for Molecular Medicine, has been named a Fellow of the prestigious American Association for the Advancement of Science (AAAS) for her distinguished contributions in neuroscience.

“I am particularly thrilled about being elected an AAAS Fellow because of the tremendous breadth of science that is covered by the organization,” said Dr. Role. “I grew up reading the AAAS journal Science and have been fortunate to have some of my collaborative work presented there,” noting how her studies on presynaptic nicotinic receptors cited in her AAAS election were published in Science.

The Role laboratory studies the generation, plasticity, and maintenance of brain circuits that are effected by Acetylcholine (cholinergic and cholinoceptive synapses). The work for which she was nominated as an AAAS fellow pioneered studies of cholinoceptive circuits in which she and her colleagues showed that nicotine exerts effects on mood and cognition through the interaction with special receptors located along the axons of CNS neurons (presynaptic receptors). In this manner, nicotine, and its endogenous homologue, Acetylcholine, fine tune the excitability of circuits that encode motivated behaviors, essentially reinforcing activities by relaying the message, “that was good, do it again.”

“Dr. Role is among the leading neurobiologists in her field, and this honor further recognizes her outstanding stewardship of our Department of Neurobiology and Behavior,” said Dennis N. Assanis, Provost and Senior Vice President for Academic Affairs at Stony Brook University. “Lorna’s research, focusing on central cholinergic systems associated with memory disorders, mood, motivation and degenerative brain disease, is groundbreaking.”

Dr. Role’s current work focuses on further dissecting the role of cholinergic signaling in circuits and behaviors related to emotional salience in learning and memory. Such studies utilize a combination of electrophysiological, optogenetic and imaging approaches both in vitro and in vivo. In collaboration with the laboratory of Dr. David Talmage (through the CNS Disorders group of the Centers for Molecular Medicine), the Role lab has been testing the hypothesis that products of the neuregulin-1 gene – a novel class of signaling molecules – are essential to the establishment and maintenance of normal central cholinergic circuits.

Dr. Role earned her AB in Applied Mathematics in 1975 and a PhD in Physiology in 1981, both from Harvard University. After three years of postdoctoral study with Dr. Gerald Fischbach, she was appointed an assistant professor in the Department of Anatomy and Cell Biology in the Center for Neurobiology and Behavior at Columbia University. She was promoted to associate professor with tenure in 1992, and in 1996 was promoted to full professor. She joined Stony Brook in 2008 as professor and chair of the Department of Neurobiology and Behavior and also serves as an adjunct professor of Neuroscience in the Department of Psychiatry at the Columbia University College of Physicians and Surgeons.

In November, the AAAS Council elected only 539 of its more than 125,000 members to this elevated rank because of their efforts toward advancing science applications that are deemed scientifically or socially distinguished. AAAS will recognize Dr. Role at the Fellows Forum to be held on February 18, 2012, during their annual meeting in Vancouver, British Columbia. The new Fellows will receive a certificate and a blue and gold rosette as a symbol of their distinguished accomplishments.

Additional honors include: election to the American College of Neuropsychopharmacology (ACNP) in 2001, earning the rank of ACNP Fellow in 2009; and two Sidney R. Baer Jr., Prizes for Innovative Schizophrenia Research. In 2010, she received the NIH Directors Pioneer Award, a prestigious award designed to support a small number of “investigators of exceptional creativity who propose bold and highly innovative new research approaches that have the potential to produce a major impact on broad, important problems in biomedical and behavioral research.” Dr. Role and her colleagues are using the Pioneer Award to investigate new approaches in dealing with cognitive deficits in neurodegenerative disorders, such as Alzheimer’s disease.