Why Moms “Lindsay” And “Holly” Walk 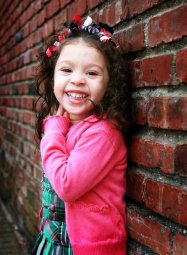 Why Moms “Lindsay” And “Holly” Walk

STONY BROOK, N.Y., April 12, 2011 – Stony Brook Long Island Children’s Hospital has partnered with theMarch of Dimes to host March for Babies, an iconic walk in which more than 900 communities participate annually. While hundreds will come out to show their support, Lindsay Soto-Vilaneuva of Hauppauge, N.Y., has one very special reason why she’ll be walking.

Lindsay’s story began when she was four months pregnant. She found out that her baby girl was going to be born with a birth defect and would require special services immediately after birth. She scheduled a tour of the Neonatal Intensive Care Unit (NICU) at Stony Brook Children’s Hospital. There she met the neonatologists and pediatric surgeons who would care for her little girl

and perform the lifesaving measures that would be needed.

Six weeks premature, Isabella, was born. Little Isabella required major abdominal surgery to repair gastroschisis, a defect that causes babies’ intestines to develop outside their abdomen. Isabella spent 31 days being cared for by specially trained nurses and doctors. The March of Dimes NICU Family Support Program offered additional emotional and educational support for the Soto-Vilaneuva family while Isabella was in the hospital.

“After Isabella’s discharge, I was so touched by my experience that I became a volunteer,” Lindsay explained, “now, four years later I work at Stony Brook Children’s helping other families with children in the NICU. I am grateful for the amazing staff at Stony Brook Children’s  who saved Isabella’s life, and for the March of Dimes, which is working hard to make sure all babies have a healthy start. This is why I walk.”

Holly Hutton, R.N., of Patchogue, N.Y., also walks for the special care her baby boy received. Holly’s story began in her 30th week of her first pregnancy. She began having intermittent pain in her lower back and her obstetrician suggested that the pain was likely a result of kidney stones. Although Holly had been prone to in the past, her doctor decided to put her on bed rest just to be safe. Two days later, when the severity of the pain became almost unbearable, she was taken by ambulance to Stony Brook Children’s where doctors tried to stop her labor and prolong her pregnancy. Despite their efforts, Holly’s baby boy was ready, even if she wasn’t.

“My story could have easily ended there. However, our son, Reid, was able to take his first breath with the assistance of a respirator. He spent his first month in an incubator and each day we received detailed updates of his progress,” Holly explains, “all of the nurses went above and beyond the call of duty in caring for Reid and teaching us to properly care for him. We would have been lost without the support of the nurses, doctors and the March of Dimes.”

Ten months later, Reid has put those days behind him, but the Huttons say they will never forget the amazing care and support they received at Stony Brook Children’s. “This is why I walk.”
For Stony Brook Children’s partnering with the March of Dimes makes perfect sense because both share the deep commitment to babies and improving the standard of care for children.

So grab your sneakers and join Lindsay, Holly and other families for a three-mile walk on Sunday, May 1, 2011 at Stony Brook University West Campus. Registration is at 8:30 am and the walk begins at 10:00 am. For more information on how to participate log on to www.marchforbabies.org or call (516) 496-2100.