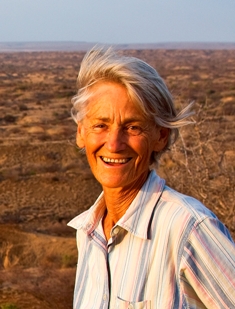 
STONY BROOK, NY, AND NAIROBI, KENYA, MAY 9, 2013 –Anthropologist Meave Leakey, a research professor in the Department of Anthropology and the Turkana Basin Institute (TBI) at Stony Brook University, has been named a Foreign Associate of the National Academy of Sciences. She is among 84 new members and 21 foreign associates from 14 countries that were elected in recognition for their distinguished and continuing achievements in original research.

“This recognition is well deserved and on behalf of Stony Brook University, I congratulate Meave on her election,” said Stony Brook University President Samuel L. Stanley Jr., MD. “The Turkana Basin has been the site of almost five decades of groundbreaking human prehistory research. Meave, along with her husband, Richard, and their daughter, Louise, have made some of the most important discoveries ever recorded in the search for human origins and we are fortunate to have her on faculty.”

Dr. Leakey joined the Stony Brook University faculty ranks in 2003 as an adjunct professor in the Department of Anthropology. In 2006 she was appointed Research Professor in the Department of Anthropology and the TBI. TBI is an institute in northern Kenya co-founded by the Leakeys and Stony Brook University to facilitate scientific, field based research.

Dr. Leakey began her tenure as the Director of Plio-Pleistocene Research at the TBI in 2007 when she incorporated the Koobi Fora Research Project (KFRP) into TBI. In addition to her research position with TBI, she takes a leading role in Stony Brook’s TBI Field School, a full-semester field education program for undergraduate students interested in studying the sciences relevant to human evolution at Lake Turkana. She is also a Research Associate at the National Museums of Kenya, a position she has held since 2001, and a National Geographic Explorer in Residence (since 2002).


Born Meave Epps in London in 1942, England, Dr. Leakey attended the University of North Wales, where she earned joint honors in Zoology and Marine Zoology. In 1965, she changed her focus away from Marine Biology and began to pursue a PhD in Zoology. That same year, she had her first contact with the Leakey family when she took a staff position at the Tigoni Primate Research Centre in Kenya, which was administered by Dr. Louis Leakey. She completed her PhD in 1968.

In 1969 she returned to Kenya and was invited by Richard Leakey to join his field expedition investigating the newly discovered paleontological site at Koobi Fora on the eastern shore of Lake Turkana. This was the beginning of a long-term involvement with the highly successful Koobi Fora Research Project (KFRP) that has received continuous research funding from the National Geographic Society. Meave became a Kenyan citizen and married Richard Leakey in 1970.

Meave worked at the National Museums of Kenya from 1969 until 2001 and she was head of the division of paleontology for many years. In 1989, when Richard Leakey left his Directorship of the National Museums to take over the management of the Kenya Wildlife Service, Meave became the director of the KFRP and coordinator of the National Museums of Kenya’s paleontological field research in the Turkana Basin. This fieldwork, under Meave’s direction, has uncovered some of the earliest-known human ancestors. In 1994, hominid remains were discovered at Kanapoi, a 4.1-4.2 Ma site to the southwest of the present lake. These finds not only represent a new species, Australopithecus anamensis, but also provide secure evidence of bipedalism at 4.2 mya.

In 1998 Meave was joined as leader of KFRP by her daughter, Louise, and together they’ve been serving as co-directors of the project ever since. In March 2001, Meave, Louise and their colleagues announced the discovery of a new genus and species of human ancestor, Kenyanthropus platyops, which shows that Australopithecus afarensis (best known from the skeleton from Ethiopia dubbed “Lucy”), is not the only contender for human ancestry. Following her retirement from the museum, Meave continued her research at Lake Turkana as a Research Affiliate of the National Museums of Kenya.

About the National Academy of Sciences

The National Academy of Sciences, created by an act of Congress in 1863, is a private, non-profit society of distinguished scholars engaged in scientific and engineering research, dedicated to the furtherance of science and technology and to their use for the public good. The National Academy of Sciences advises the U.S. government on the scientific and technological issues that affect policy decisions. With these new members, the total number of active members is now 2,179 and the total number of foreign associates is 437, of whom approximately 200 have received Nobel prizes.

About the Turkana Basin Institute

The Turkana Basin Institute (TBI) is a privately funded, non-profit initiative, founded by Richard Leakey and Stony Brook University. It is a collaborative, international, multi-disciplinary enterprise that seeks to facilitate fieldwork within the Lake Turkana Basin by providing logistical support to researchers. The primary research focus is human prehistory and related earth and natural science studies. As the most important repository of fossil evidence for human evolution, a major commitment of TBI is to safeguard the extensive fossil deposits in the region through engagement with the local communities.