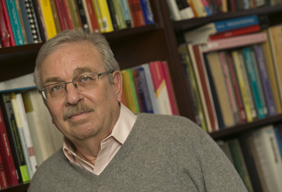 “I congratulate Professors Mark Aronoff and Blaine Lawson for their remarkable scholarly achievements and for their receipt of this distinguished honor,” said Dennis N. Assanis, Provost and Senior Vice President for Academic Affairs at Stony Brook University. “Their groundbreaking research has been transformative to, and has greatly impacted junior faculty within, their respective fields. We are exceptionally proud that Stony Brook is home to these renowned faculty members.”

Dr. Aronoff’s research has focused on morphology, the internal structure of words. In the past decade, he has devoted great effort to working on sign language, especially new sign languages, which he and members of his group believe can unlock some of the basic properties of all human languages.

“I have always believed in the power of collaboration,” said Dr. Aronoff. “This honor is as much for the wonderful people with whom I have worked over the years as it is for me.”

Dr. Lawson’s mathematical research has essentially been in the area of (differential and algebraic) geometry, although the problems he has worked on have varied greatly over the years. His earliest work was in the field of “minimal surfaces” or surfaces of least area like those formed by soap films spanning a wire frame. In his thesis, he discovered (proved the existence of) minimal surfaces of all possible topological types in the 3-sphere and later established the existence of codimension-1 foliations of the 5-sphere (and spheres of higher dimension). A foliation is a decomposition of the space into “leaves” much like the leaves of a book. The existence of such structures had been an outstanding problem for some time.

“I am greatly honored,” said Dr. Lawson. “It is rare to receive recognition for mathematical accomplishments from outside the field, so this election means a lot to me and my colleagues.”


About the American Academy of Arts & Sciences


Founded in 1780 by John Adams, James Bowdoin, John Hancock and other prominent early-American leaders, the Academy has been electing leading “thinkers and doers” from each generation, including George Washington and Benjamin Franklin in the 18th century, Daniel Webster and Ralph Waldo Emerson in the 19th century and Albert Einstein and Winston Churchill in the 20th century. Current membership includes more than 250 Nobel laureates and more than 60 Pulitzer Prize winners. The current membership includes some of the world’s most accomplished leaders from academia, business, public affairs, the humanities and the arts. Among the new fellows of the Academy are winners of the Nobel Prize; National Medal of Science; the Lasker Award; the Pulitzer and the Shaw Prizes; the Fields Medal; MacArthur and Guggenheim fellowships; the Kennedy Center Honors; Grammy, Emmy, Academy and Tony awards; and Rock and Roll Hall of Fame members. Members contribute to Academy publications and studies of science and technology policy, energy and global security, social policy and American institutions, and the humanities, arts and education.


Part of the State University of New York system, Stony Brook University encompasses 200 buildings on 1,450 acres. Since welcoming its first incoming class in 1957, the University has grown tremendously, now with more than 24,000 students and 2,200 faculty. Its membership in the prestigious Association of American Universities (AAU) places Stony Brook among the top 62 research institutions in North America. U.S. News & World Report ranks Stony Brook among the top 40 public universities in the nation and Kiplinger named it the 22nd best value in public colleges for in-state students and 9th for out-of-state students. One of four University Center campuses in the SUNY system, Stony Brook University co-manages Brookhaven National Laboratory, putting it in an elite group of universities that run federal research and development laboratories. As the largest single-site employer on Long Island, Stony Brook is a driving force of the regional economy, with an annual economic impact of $4.65 billion, generating nearly 60,000 jobs, and accounts for nearly 4% of all economic activity in Nassau and Suffolk counties, and roughly 7.5 percent of total jobs in Suffolk County.