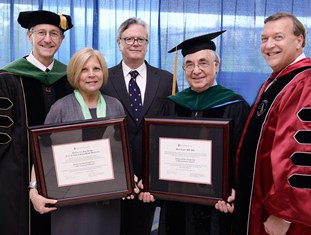 
in gastroenterology and cancer prevention, was formally installed as the William and Jane Knapp Chair in Pharmacological Sciences during an Investiture Ceremony at Stony Brook Medicine.

The Knapp Chair, established in 2005, is bestowed upon Stony Brook faculty who contribute to scientific and clinical advances in the early detection of the most lethal cancers. The ceremony honored Dr. Rigas for his career and accomplishments at Stony Brook as a scientist, clinician and medical educator. Dr. Rigas, who came to Stony Brook in 2004, is developing a series of innovative agents for the prevention of certain gastrointestinal cancers. This includes pioneering research on an aspirin derivative that shows promise in the prevention of colon and pancreatic cancer.

The ceremony also honored benefactors William and Jane Knapp for their philanthropic support and commitment to research at Stony Brook University. The Knapps (’78) believe that Stony Brook is an institution that tackles big challenges with big ideas, such as those embodied in the work of Dr. Rigas. They also view the collaborative research by Stony Brook scientists as a leading component of the institution.

“The best ideas come from an integrated team that is passionate about what it does,” said William.

“Not everyone can participate in research to prevent, detect or treat cancer,” said Jane, referring to forms of the disease such as pancreatic cancer, which claimed the life of her brother, Michael Trapani. “But everyone can help in some way. One important way would be by investing in Stony Brook, whether it’s $25 or $25 million. That’s the only way it’s going to happen.”

“Endowed professorships and chairs are the hallmark of a great university, and it is my aspiration that Stony Brook University joins those ranks,” said Samuel L. Stanley Jr., MD, President, Stony Brook University, “We are so fortunate to have the strong, long-time support of alumni Jane and Bill Knapp. Since graduating from Stony Brook, they have been increasingly involved in the life of the University and helping us achieve our goal of excellence across both campuses. They have made this day possible to honor Dr. Basil Rigas, who epitomizes the standard for the holder of an endowed chair.”

“We owe a tremendous debt of gratitude to Bill and Jane Knapp for their continued dedication and outstanding generosity to the University,” said Kenneth Kaushansky, MD, Senior Vice President of the Health Sciences and Dean of the School of Medicine. “Stony Brook Medicine is growing quickly and on a steep trajectory toward excellence in everything we do. Today we honor one of our finest faculty members. Excellence defines the work of Dr. Basil Rigas. This encompasses his clinical and research work in the fields of gastroenterology and cancer prevention, and his many academic and administrative accomplishments.”

“I am thrilled and humbled by this unique honor, and I want to express my deep appreciation to Bill and Jane Knapp for their generosity in establishing the William and Jane Knapp Chair in Pharmacological Sciences,” said Dr. Rigas. “As the incumbent of the chair, I will remain cognizant of not only the honor but also the obligation that accompanies it, namely, to fulfill their expectation of scientific excellence.”

“Philanthropic support is an essential catalyst to growing the research mission of a major university,” said Dexter A. Bailey, Jr., Vice President of Advancement at Stony Brook University. “We are grateful for the Knapps generous support, and we are certain with Dr. Rigas’ leadership and the vast scientific talents of our researchers, great progress will be made in discovering new ways to treat deadly diseases like cancer.”

Endowed faculty positions are a hallmark of leading academic institutions and are named as an enduring tribute to the donor. They bring recognition to the chair holder, the department, and the university. The endowments provide a means of continuous funding that supports scholarly work, research, and recruitment of eminent faculty.

Basil Rigas, MD, DSc, came to Stony Brook in 2004. He is Director of the Center for Cancer Prevention, which he established in 2005. The Center is a joint effort of the School of Medicine and College of Engineering and Applied Sciences to develop effective and applicable methods to prevent human cancer by way of cross-disciplined research, such as microimaging and novel sensors to detect cancer. The Center has received federal funding for its Cancer Prevention Through Wireless Sensing Program, which incorporates an evolving area of research that uses nanotechnology in the prevention of cancer.

Dr. Rigas is recognized internationally for his research on the prevention of colon cancer using traditional NSAIDs, Nitric-Oxide-donating NSAIDs, and other pharmacological agents. He has also pioneered the application of infrared spectroscopy to biology with emphasis on cancer, holding several relevant patents.

During his tenure at Stony Brook as Chief of the Division of Gastroenterology and Hepatology, Dr. Rigas rebuilt the GI clinical faculty at Stony Brook Medicine, which now has the expertise and capability to provide specialized care for approximately 11,500 patient visits a year, nearly a doubling of patient volume over the past five years. The endoscopy service has also grown substantially, as GI faculty members now perform 10,000 endoscopic procedures annually.

A specialist in treating gastrointestinal malignancies, Dr. Rigas is a physician-scientist and educator. He has published nearly 200 scientific papers and has 38 patents or patent applications. Dr. Rigas is also co-author of Clinical Gastroenterolgy, which has been translated into multiple languages and is used as a standard at many academic medical centers worldwide.