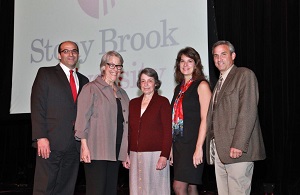 STONY BROOK, N.Y., October 18, 2013 – The Department of Psychiatry and Behavioral Science invited a former patient receiving psychiatric
treatment later turned filmmaker Lucy Winer to conduct a departmental Grand Rounds on the making of her award-winning documentary
Kings Park: Stories from an American Mental Institution
. The educational forum, held at the Wang Center, sparked discussions about the progress and shortcomings of the country’s mental health care system. The event was also a return to Stony Brook for Winer, a Stony Brook University alumna (BA in English and Theater, 1973).

The educational presentation was part of National Mental Health Awareness Week sponsored by the National Alliance for the Mentally Ill. Some 150 attended, including University faculty, Psychiatric Department residents and staff, students, and members of the community at large.

Several years ago Winer, who was a patient at Kings Park Psychiatric Center at age 17, met with a group of Stony Brook Psychiatry faculty to get feedback on editing her documentary project about the state mental health facility that closed in 1996. Shortly thereafter, the film was completed. Its first public showing was at the Staller Center’s 2011 Stony Brook International Film Festival.

“Ms. Winer’s film and the story of her life remind us of how far psychiatry has come in the past 50 years — and how far we have yet to go,” said Ramin Parsey, MD, PhD, Professor and Chair of Psychiatry. “We have come farther in 50 years than we have over the entire history of medicine, but we are not moving as fast as we would like. Until we discover a cure for brain diseases like schizophrenia and bipolar disorder, we need to provide care that is compassionate and of the highest quality.”

Evelyn Bromet, PhD, Distinguished Professor of Psychiatry, who first met Winer at Mental Illness Awareness Day in 2010, encouraged Winer to submit her documentary to the Stony Brook Film Festival and invited her to speak at the Grand Rounds event.

“Lucy’s return to Stony Brook is inspiring to all of us, and I could not think of a more powerful way for all of us to take in her story and perspective as a patient, and her objectivity as a documentary filmmaker, to better understand the problems and progress within our mental health system,” said Dr. Bromet.

Winer said she felt compelled to return to the violent women’s ward at Kings Park to “rescue” a part of herself she left there 30 years earlier. She was committed to the hospital following a series of failed suicide attempts. After visiting the ward and interviewing former patients and staff, the project evolved into a vivid documentary about the treatment of people with mental illness during the past five decades.

Winer selected six excerpts of the film to illustrate her own journey through the mental health system, stories from former staff and patients at Kings Park, and the lives of former patients after their hospitalizations. The last excerpts depicted both significant problems that still exist within the mental health system as well as the positive changes. Most notably, the scenes illustrated that a large portion of individuals with mental illness are now “sheltered” in the criminal justice system rather than at a mental health facility. Yet, at the same time, the development of organizations such as Clubhouse of Suffolk and Hands Across Long Island are dedicated to the well-being and productivity of those who suffer from mental illness.

“From an educational standpoint, this event helped our residents and students gain a deeper appreciation of what state hospitals were like,” said Dr. Michael Schwartz, the Department’s Director of Residency Training. “These institutions were a central part of mental health care for most of the 20th century. Learning about their history helps students and trainees understand more about the present system of care.”

Winer’s films have won numerous awards, including Outstanding Film of the Year from the London Film Festival, a Golden Plaque from the Chicago International Film Festival, a CINE Golden Eagle and an Emmy nomination for Outstanding Picture. “Kings Park” has been praised as a “tour de force,” “beautiful cinematically,” and a “masterpiece.”

About the Department of Psychiatry and Behavioral Science

The Department of Psychiatry and Behavioral Science is a clinical, research and educational program of Stony Brook University School of Medicine. Clinical services include programs in adult and child and adolescent psychiatry. Research ranges from basic to translational investigations in neuroscience, epidemiology and behavioral science. A new brain imaging program provides clinicians with new diagnostic and prognostic tools as well as provides faculty and students with a platform to conduct biologically based brain imaging research.