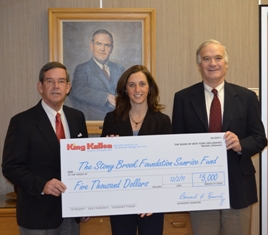 In August and September, King Kullen and Wild By Nature grocery stores throughout Long Island asked customers at checkout if they would donate a dollar for children’s hospital care. On Dec. 2, King Kullen Presidents Brian C. Cullen and J. Donald Kennedy presented a check for $5,000 to Danielle Holton, Senior Director of Development for Stony Brook University Medical Center, representing Stony Brook’s share of proceeds from the initiative.

“This gift represents the generosity of King Kullen in undertaking this initiative, as well as the generosity of its customers,” Holton said. “We are deeply thankful for their support, which helps us move closer to making a new Stony Brook Children’s hospital a reality for Long Island.”

Founded in 1930 in Queens, NY, King Kullen has been recognized as the nation’s first supermarket. Three generations later, King Kullen is still family controlled and operated, with 45 stores located throughout Long Island and in Staten Island. King Kullen also owns and operates four Wild By Nature stores on Long Island as a subsidiary of King Kullen.