After 10 Surgeries at Stony Brook, Boy from Ecuador to Return Home with a Transformed Face 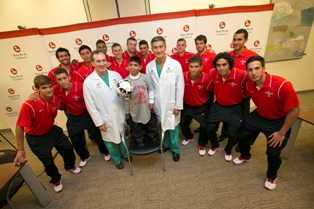 After 10 Surgeries at Stony Brook, Boy from Ecuador to Return Home with a Transformed Face

STONY BROOK, N.Y., September 16, 2013 – Kevin Rosero, 10, a boy from Ecuador who lived his whole life with a rare massive venous malformation on his face that involved his tongue, pharynx, lip, cheek, eye socket and temporal bone, a potentially life-threatening condition that could not be treated in his home country, will be leaving Long Island and going back home on September 17 with a transformed face. He spent the last eight months on Long Island and endured 10 surgical procedures by Stony Brook surgeons Drs. Alexander Dagum and Henry Woo and a team of professionals from Stony Brook Children’s Hospital who cured his condition.

Kevin came to the United States under the sponsorship of Blanca’s House. Dr. Dagum, Chief of Plastic and Reconstructive Surgery, examined Kevin during a 2012 Blanca’s House mission to Ecuador and knew that he, Dr. Woo, a cerebrovascular and endovascular neurosurgeon and Co-Director of Stony Brook’s Cerebrovascular Center, and their Stony Brook colleagues could remove the massive venous malformation and reconstruct his face in steps. Blanca’s House approached Kevin’s family and with their approval arranged for a host family to care for Kevin during his stay on Long Island.

To celebrate Kevin’s victory, his Stony Brook caregivers, his host mom Sheila Campbell, of Miller Place, Kerry O’Sullivan from Blanca’s House, and members of the Stony Brook University NCAA Division I Men’s Soccer Team, gave Kevin a special sendoff on September 13. The soccer team surprised Kevin, a big soccer fan, with a ball signed by the entire team, a Seawolves T-shirt, and an invite to the game that evening as an honorary captain. Kevin brought his charm and enthusiasm to the game, and the Seawolves beat Rhode Island 1-0. See video clip of Kevin running onto the soccer field with Stony Brook players.

“The malformation made it hard for Kevin to eat and speak and he was always at risk of bleeding and potentially dying from an airway obstruction or going blind in his left eye,” explained Dr. Dagum. “Kevin has done remarkably well and will live the rest of his life without the malformation and like any normal boy.”

“Not only did Kevin endure all these surgeries, his self-confidence and ability to interact with people changed dramatically over the course of this year,” said Dr. Woo when describing Kevin, who learned English as a fourth-grader during his stay on Long Island.

Dr. Woo had to perform eight procedures to shut down the vascular malformation. He completed multiple embolizations and sclerotherapy to reduce the size and close off the major venous channels. After Kevin healed from this series of treatments, Dr. Dagum proceeded with a major resection of the remaining cheek, lip, oral, and orbital components of the venous malformation. This was followed by a second surgery to create a normal-looking lip.

Kevin needed to time to heal between each procedure. The surgeries were performed at Stony Brook Medicine as part of its teaching mission.

“Kevin is a remarkable and brave young boy,” said Sheila Campbell. “Thanks to Blanca’s House and the amazing work of Kevin’s Stony Brook doctors, Kevin’s life has changed. This would not have been possible without them. He will be going home to his family completely healthy and with a bright future.”

Campbell said that by having Kevin in her home, she and her family go so much more out of the experience than they gave. Not only did Kevin endure all of his surgeries, she said, he did well in school, especially math, and continued to play his favorite sport – soccer – on a local youth team. He even embraced a new sport – baseball – and now loves to watch the Yankees and his favorite player, Robinson Cano.

“Our team had a great opportunity to meet Kevin today and learn about his story,” said Head Coach Ryan Anatol. “There are ups and downs, highs and lows, but to really learn what he’s been through, spend some time with him and see how positive he has been throughout everything, it was an awesome experience.”

For more on Kevin’s big day with the Men’s Soccer Team, see Seawolves win one for their honorary captain.


To see photos of the press event and soccer game, click on this Stony Brook Children’s Facebook page.