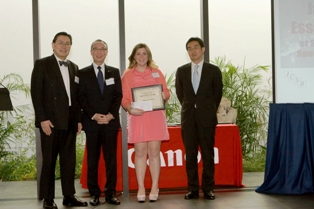 STONY BROOK, NY, May 17, 2013 – The Japan Center at Stony Brook University (JCSB) recently held their eighth annual essay competition, a writing contest designed to promote awareness and understanding of Japan in the United States and to help young Americans broaden their international horizons. The competition, co-sponsored by JCSB and Canon U.S.A, Inc., is separated into a high school and college division, and open to students enrolled in high school or college (undergraduate) in the New York metropolitan area. This year’s competition brought in 199 entries from 32 different high schools and two colleges.

For their essays, contestants were encouraged to write about one or more aspects of Japan, including, but not limited to: Japanese art, culture, tradition, values, philosophy, history, society, politics, business and technology in relation to their personal views, experiences and future goals. Winners were recognized at an award ceremony and reception held at the Charles B. Wang Center at Stony Brook University.

“Contestants are not required to have experience visiting Japan or learning the language,” said Eriko Sato, Chair, Executive Committee, JCSB, and a Lecturer in the Department of Asian and Asian American Studies at Stony Brook. “Students have total freedom on how they develop their essay. Because Japan and America are culturally quite distant, the challenge of relating Japanese culture to our lives in America has resulted in many inspiring essays.”

Madison Jaye LoFaso, a sophomore at Huntington High School, took home the top prize for the high school division winning $3,000, a Canon camera and an award certificate. She also received a special certificate from Shigeyuki Hiroki, Ambassador and Consulate General of Japan in New York, who also serves as a judge. She was selected for her work, “No Stroll in the Park,” about a Saturday morning spent with her parents at the John P. Humes Japanese Stroll Garden in Mill Neck, NY.

In her essay, Madison detailed how she began the day wishing she was elsewhere. Then after taking in the serene beauty and learning more about the garden from her tour guide, she found herself lost in her surroundings – so much so that she didn’t check her cell phone once.

“On the drive home it hits me; a feeling of regret for my behavior toward my parents at the start of the day,” Madison wrote. “What if they relented and let me stay home? I would never have learned that aspects of the Japanese culture could have such an emotional effect on me. I only hope that someday I can travel to Japan and visit some authentic Japanese gardens.”

Camille Tedeschi, Madison’s teacher remarked, “This contest is quite unique as it gives students an opportunity to write about Japan in a way that connects to their learning and their personal lives,” she said. “After traveling to Japan in 2010, this contest has grown to be one of the passions that I love to share with my students. Maddie is never going to forget this achievement and experience and I know it will open up her mind and heart to want to know more about Japan and all of its wonders.”

In the college division, Melisa Rose Kavanah, a Stony Brook senior majoring in English won the top prize for her essay entitled, “Understanding Impermanence.” Another Stony Brook student, Ali Gilani Syed, a junior majoring in engineering won the Uchida Memorial Award for his essay entitled, “Wabi-Sabi: Nothing is Perfect, Even Gardens Have Weeds.”

In these winning essays, both authors shared an unbearable experience, that is, the death of a friend for Kavanah and the passing of a beloved grandmother for Ali. Kavanah and Ali were presented with prizes of $3,000 and $1,000, respectively, a Canon camera and an award certificate.

All of the winners in each division have been invited to visit Ambassador and Consulate General Hiroki, at his official residence in Manhattan for a formal lunch meeting on Saturday, May 25.

The entries were judged by a panel of Stony Brook University faculty members and two honorary judges, Ambassador and Consulate General Hiroki and Joe Adachi, President & CEO of Canon U.S.A., Inc. This essay competition is also supported by the Professional Education Program at Stony Brook University.