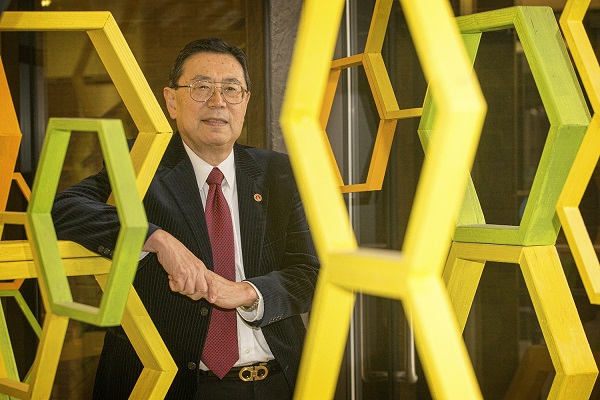 STONY BROOK, N.Y., December 16, 2014 – Iwao Ojima, PhD, SUNY Distinguished Professor in the Department of Chemistry, and Director of the Institute of Chemical Biology & Drug Discovery (ICB&DD) at Stony Brook University, has been named a Fellow of the National Academy of Inventors (NAI).

According to the NAI, election as an “NAI Fellow” is “a high professional distinction accorded to academic inventors who have demonstrated a prolific spirit of innovation in creating or facilitating outstanding inventions that have made a tangible impact on the quality of life, economic development and the welfare of society.” Dr. Ojima and other new 2014 NAI Fellows will be inducted on March 20, 2015, as part of the 4th Annual Conference of the NAI at the California Institute of Technology in Pasadena.

“Professor Ojima has had a highly distinguished career as an educator, researcher and inventor at Stony Brook,” said Samuel L. Stanley Jr., MD, President of Stony Brook University. “His work in medicinal chemistry and chemical biology has led to important discoveries, contributing to the betterment of society. I am so pleased to see his many accomplishments recognized by this distinguished academy.”

“Dr. Ojima has distinguished himself as a world-renowned scholar and inventor with outstanding contributions to a broad range of chemical sciences,” said Benjamin Hsiao, PhD, a Professor in the Department of Chemistry, Affiliated Professor in Materials Science & Engineering, and Founding Director of the Innovative Global Energy Solutions Center at Stony Brook University. “His work at Stony Brook has impacted global research and discovery in the areas of organic, organometallic, fluorine medicinal and pharmaceutical chemistry, as well as chemical biology and drug discovery, with multifaceted interfaces with chemistry, biology and medicine.”

A faculty member in Chemistry at Stony Brook since 1983, Dr. Ojima has been granted more than 100 patents. The Research Foundation for the State University of New York has filed more than 80 of these patents globally on his behalf.

Additionally, since 2004 his leadership as Director of the ICB&DD has brought interdisciplinary and multidisciplinary research bridging the physical sciences, biological sciences, biomedical engineering and various School of Medicine departments together, along with expertise from Brookhaven National Laboratory, to tackle significant biomedical problems and find solutions, including the discovery of novel therapeutic drugs. During these 10 years, the ICB&DD has received more than $40 million in research grant funding to advance discoveries.

Dr. Ojima’s many contributions to medicinal chemistry and chemical biology include: the discovery and development of a new generation of taxoid anticancer agents, which possess excellent anticancer activity against drug-resistant cancer cells and tumors; the development of fluorine-containing taxoids as excellent probes for the identification of bioactive conformations of paclitaxel and taxoids; the creation of highly efficacious taxoid conjugates with monoclonal antibodies, omega-3 fatty acids, and vitamins for tumor-targeting cancer chemotherapy; and the discovery and development of novel anti-tuberculosis agents targeting bacterial cell division protein.

“I am honored to receive this esteemed distinction as an NAI Fellow,” said Dr. Ojima. “We will continue to promote our sprit of innovation and invention at Stony Brook and through multidisciplinary collaborative research ventures at the ICB&DD, with the goal of discovering and developing new and efficacious therapeutic drugs to treat challenging diseases.”

“Groundbreaking, impactful research conducted by our faculty and students across New York State is an incredible source of pride for SUNY as we aim to drive knowledge and innovation in a global economy,” said SUNY Chancellor Nancy L. Zimpher. “Congratulations to Dr. Cartwright and Dr. Ojima on this distinct honor from the NAI. This honorable recognition is a testament not only to their outstanding work but to the innovation ecosystems that SUNY campuses foster in every region.”

Iwao Ojima received his B.S. (1968), M.S. (1970), and Ph.D. (1973) degrees from the University of Tokyo, Japan.  He joined the Sagami Institute of Chemical Research and held a position as Senior Research Fellow until 1983. He joined the faculty at the Department of Chemistry, State University of New York at Stony Brook first as Associate Professor (1983), was promoted to Professor (1984), Leading Professor (1991), and then to University Distinguished Professor (1995).  He served as the Department Chairman from1997 to 2003.  He serves as the founding Director for the Institute of Chemical Biology and Drug Discovery (ICB&DD) at Stony Brook from 2003.  Also, he was a Visiting Professor at the Université Claude Bernard Lyon I, France (1989), The University of Tokyo, Japan (1996), The Scripps Research Institute, La Jolla, CA (1997), and Université de Paris XI, BIOCIS, Châtenay-Malabry, France (1997).

His research interests include medicinal chemistry and chemical biology (anticancer agents, tumor-targeted drug delivery, antibacterial agents, enzyme inhibitors), catalytic asymmetric synthesis, organic synthesis by means of organometallic reagents and catalysts, peptidomimetics, b-lactam chemistry (applications of the beta-lactam synthon method), and organofluorine chemistry (fluoroamino acids and peptides, fluorotaxoids, medicinal applications).  He has published more than 400 papers and reviews in leading journals and more than l00 patents issued (33 US patents), edited 8 books (SciFinder lists >850 publications to his credits; Google Scholar indicates total citation number of >19,500 as of September 2014), and he has given more than 120 Plenary and Invited Lectures in international conferences and symposia by September 2014.

“Stony Brook University is extremely proud to have this renowned chemistry professor receive another prestigious award,” said Dennis N. Assanis, Provost and Senior Vice President for Academic Affairs at Stony Brook University. “Iwao’s contributions, leadership, quality of research and dedication are valued assets to our University. I congratulate him on this well-deserved honor.”

“Dr, Ojima has for many years been one of Stony Brook University’s leading faculty in technology transfer and innovation in the biomedical realm,” said David O. Conover, Interim Vice President for Research. “He is richly deserving of this award, and I congratulate him on this outstanding career achievement.”

“One of Stony Brook’s most prolific inventors, Dr. Ojima has developed numerous new chemical entities that have the potential to be efficacious therapeutics for cancer and infectious disease,” said Peter Donnelly, Director of the Office of Technology Licensing and Industry Relations. “Dr. Ojima has worked closely with our office and industry to successfully foster commercial partnerships to translate his discoveries into therapeutic modalities.”

“I am delighted that Dr. Ojima is being inducted into the NAI,” said Nicole Sampson, Professor and Chair of the Department of Chemistry. “He is the fourth Stony Brook Chemistry faculty member inducted into the NAI. This recognition illustrates the centrality of chemistry for the translation of fundamental research into applications that benefit humanity.”