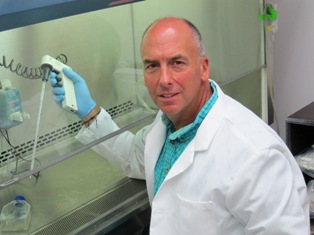 William Van Nostrand, PhD, Professor in the Departments of Neurosurgery and Medicine, in his Stony Brook laboratory.


STONY BROOK, NY, June 29, 2012 – The beakers, test tubes and other equipment in the laboratory of William Van Nostrand, PhD, Professor in the Departments of Neurosurgery and Medicine, Stony Brook University School of Medicine, do not give hints toward one of his driving passions – pounding the pavement, pedaling for miles, and swimming for hours, all to advance awareness against Alzheimer’s disease. On August 11, Dr. Van Nostrand will compete in New York City’s first Ironman Triathlon.


Dr. Van Nostrand conducts studies in his laboratory on the molecular pathology of Alzheimer’s disease and related disorders. According to the Alzheimer’s Association, the fatal illness affects more than five million Americans and is a leading cause of death and disability in an aging U.S. population. Dr. Van Nostrand, who has competed in many athletic events, including bike rides, road races, swimming events and triathlons, will compete in several events this summer to support Alzheimer’s disease research.

“There needs to be a war against Alzheimer’s in our country and worldwide,” says Dr. Van Nostrand. “With an aging population, there will be a dramatic increase in the incidence of this deadly disease in the near future, and right now the toll on the individuals afflicted and their families in terms of the physical, emotional, and financial burdens, is huge. We need to further research to discover effective ways to curb and perhaps even cure the disease.”

With his even keel approach to topics and a relaxed demeanor, Dr. Van Nostrand is not one to tout his athletic accomplishments. He has displayed his athletic talents in many events. For example, in 2010 Dr. Van Nostrand swam and was the first to finish in the 3-mile open water Distant Memories Swim in Northport, N.Y., an event to raise awareness of Alzheimer’s disease. He also moved beyond the lab to the long and winding roads of America in 2010 with 55 other Alzheimer’s researchers during the Alzheimer’s Breakthrough Ride. He rode hundreds of miles, including a 282 mile leg in Texas, in a ride that ended in Washington, D.C., on World Alzheimer’s Day.

August 11 will be the first time the Ironman Triathlon will be held in a major metropolitan area. The New York City event will consist of a 2.4 mile swim in the Hudson River, followed by a 112 mile bike segment mainly along the Palisades Parkway in New Jersey, then a 26.2 mile marathon run along the Palisades Parkway, across the George Washington Bridge, and finishing in Riverside Park in Manhattan.

“These challenges provide me with opportunities as an active Alzheimer’s disease research scientist to raise awareness and contribute to combating this disease outside my investigative efforts in the laboratory and interacting with the scientific community,” says Dr. Van Nostrand, who began his training for the Ironman in January 2012.