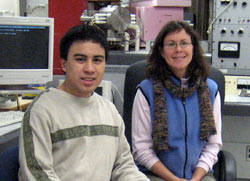 STONY BROOK, N.Y., February 5, 2009 – Three of the 40 high school students selected nationwide as finalists in the prestigious Intel Science Talent Search, also known as the “junior Nobel Prize” research competition, conducted their research at Stony Brook University under the mentoring of Stony Brook faculty. Two of the three finalists participated in the elite Simons Summer Research Fellowship program, founded in 1984 and sponsored by the Simons Foundation.

The three Intel finalists mentored at Stony Brook University include:


•    Patrick Abejar from Smithtown HS West, Smithtown, mentored by Dr. Troy  Rasbury in Geosciences on “Utilizing Boron Isotopic Secular Variation as a Proxy to Assess Climate Change.” His research focused on patterns of global warming. He found that the levels of boron in marine fossils fluctuate with global warming and cooling.

•    Christine Shrock from Ward Melville HS (Three Village School District/*INSTAR),  East Setauket, mentored by Dr. Carlos Simmerling in Chemistry on “Effects of Lid Dynamics on the Binding of MDM2 to the Tumor Suppressor Protein p53:  Implications for Cancer Therapeutics.” Her research focus was to help design better cancer drugs which targeted structural changes at the molecular level of a protein called MDM2.

The compelling numbers underscore Stony Brook’s reputation in developing the research talents of exceptional high school students. Stony Brook faculty have mentored 219 Intel semifinalists over the past seven years; 27 of them in 2008; of those, 11 were from Ward Melville High School 10 of whom conducted their research in Stony Brook laboratories.

All Intel Science Talent Search finalists are invited to Washington, D.C., in March, where they will compete for accolades and scholarships, including a top prize of $100,000.