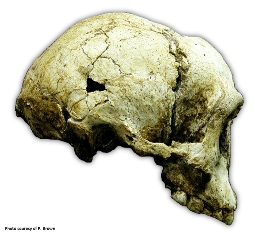 STONY BROOK, N.Y., July 10, 2013 – Ever since the discovery of the remains in 2003, scientists have been debating whether Homo floresiensis represents a distinct Homo species, possibly originating from a dwarfed island Homo erectus population, or a pathological modern human. The small size of its brain has been argued to result from a number of diseases, most importantly from the condition known as microcephaly.

Based on the analysis of 3-D landmark data from skull surfaces, scientists from Stony Brook University New York, the Senckenberg Center for Human Evolution and Palaeoenvironment, Eberhard-Karls Universität Tübingen, and the University of Minnesota provide compelling support for the hypothesis that Homo floresiensis was a distinct Homo species.

The study, titled “Homo floresiensis contextualized: a geometric morphometric comparative analysis of fossil and pathological human samples,” is published in the July 10 edition of PLOS ONE.


The ancestry of the Homo floresiensis remains is much disputed.
The critical questions are: Did it represent an extinct hominin species? Could it be a Homo erectus population, whose small stature was caused by island dwarfism?

Or, did the LB1 skull belong to a modern human with a disorder that resulted in an abnormally small brain and skull? Proposed possible explanations include microcephaly, Laron Syndrome or endemic hypothyroidism (“cretinism”).

The scientists applied the powerful methods of 3-D geometric morphometrics to compare the shape of the LB1 cranium (the skull minus the lower jaw) to many fossil humans, as well as a large sample of modern human crania suffering from microcephaly and other pathological conditions. Geometric morphometrics methods use 3D coordinates of cranial surface anatomical landmarks, computer imaging, and statistics to achieve a detailed analysis of shape.

This was the most comprehensive study to date to simultaneously evaluate the two competing hypotheses about the status of Homo floresiensis.

The study found that the LB1 cranium shows greater affinities to the fossil human sample than it does to pathological modern humans. Although some superficial similarities were found between fossil, LB1, and pathological modern human crania, additional features linked LB1exclusively with fossil Homo. The team could therefore refute the hypothesis of pathology.

“Our findings provide the most comprehensive evidence to date linking the Homo floresiensis skull with extinct fossil human species rather than with pathological modern humans. Our study therefore refutes the hypothesis that this specimen represents a modern human with a pathological condition, such as microcephaly,” stated the scientists.