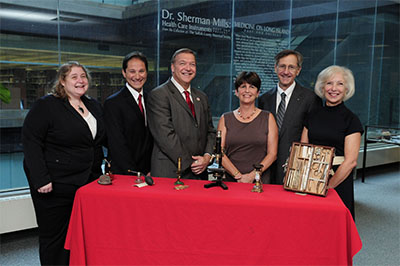 
STONY BROOK, N.Y., September 17, 2012 — A new exhibit at the Stony Brook University Health Sciences Library that displays medical instruments and objects from the mid-1800s to the 1980s illustrates the evolution of modern medicine. A concept initiated by the Suffolk County Historical Society, “Healthcare Instruments – Past and Present” was developed in partnership with the Stony Brook University Libraries and Stony Brook Medicine. The exhibit showcases instruments from the collection of the late Dr. R.Sherman Mills of Setauket, a family physician on Long Island who practiced medicine from the 1940s to early 1980s. The exhibit opened September 13, 2012, and will be on display for the entire 2012-13 academic year.

Currently 40 medical instruments from Dr. Mills’ collection are featured in the Stony Brook exhibit, which is the first in a series of displays at the Health Sciences Library. All of the instruments were donated by the Mills family to the Suffolk County Historical Society.

“This exhibit is a wonderful example of how Stony Brook University partners with community organizations like the Suffolk County Historical Society to create an experience that benefits everyone,” said Samuel L. Stanley Jr., MD, President of Stony Brook University. “Thanks to the family of Dr. Mills and the Suffolk County Historical Society, Stony Brook has the opportunity to feature displays that clearly show how far we have progressed in medicine. By experiencing this exhibit, students and practitioners alike are able to put Stony Brook’s advanced and cutting-edge medical practices into perspective.”

“Healthcare Instruments—Past and Present” is in keeping with an academic medicine trend to showcase centuries-old medical instruments to expand the understanding and educate students on the history of medicine and the health sciences. Major medical research organizations also promote the professional knowledge and public understanding of the history of healthcare practices through exhibits or archives. For example, the National Institutes of Health includes an educational arm on the History of Medicine, and the New York Academy of Medicine opened a Center for the History of Medicine and Public Health in 2012.

“Only by knowing our past in medicine will we be able to develop new innovations in the future,” said Kenneth Kaushansky, MD, MACP, Senior Vice President for the Health Sciences and Dean, School of Medicine. “The displays in the exhibit are a teaching tool to understanding a timeline of progress for medical practice in areas such as treating trauma and injuries, infectious diseases, and common illnesses that have affected people for many generations.”

This new exhibit underscores the continued importance of libraries in the University’s academic and research missions,” said Andrew White, PhD, Interim Dean of Libraries, Stony Brook University Libraries. “Even in today’s technology driven information age, libraries continue to play a longstanding role in collecting information about both the past and present. It is equally important for Stony Brook as Long Island’s largest research library to preserve such unique collections, which are also examples of primary source information, whether printed, digital, or physical items like in this exhibit.”

“We are very happy to work with Stony Brook so that students and the community can step back into the past and get a stronger sense of what instruments were used in the practice of medicine many years ago,” said Kathryn Curran, Director, Suffolk County Historical Society.

“The medical instruments and objects exhibited are a visual presentation of the timeless challenges of treating illness and injury,” explained Carla C. Keirns, MD, PhD, Assistant Professor of Preventive Medicine, and Medicine & History, Stony Brook University School of Medicine, and one of the curators of the exhibit. “As a whole the objects indicate the similarities and differences in the ways doctors have treated illness and injury for more than a century.”

“The exhibit features three primary glass displays. Each display is organized by a single history of medicine theme. These themes are: Visiting Doctors, Diptheria and Whooping Cough (Pertussis), and Hazards of the Job.

Dr Keirns pointed out that until the beginning of the 20th Century, health care from birth to death generally happened at home, even surgery and especially childbirth. The Visiting Doctors display features items like an umbilical scissors (circa 1940s), a metal either mask (circa late 1800s), and Dr. R. Sherman Mills’ doctor’s bag, which he used for house calls into the 1980s.

Late 19th and early 20th Century medical instruments used to treat infectious diseases and exhibited in the Diptheria and Whooping Cough display are powerful reminders of the dangers of diseases such as diphtheria, pertussis (whooping cough), tuberculosis, and influenza a century ago. Thousands of children died of diphtheria and pertussis each year during the early decades of the 20th Century, Tuberculosis remained the leading cause of death in the United States through the 1920s, and the influenza pandemic killed as many as 100 million people worldwide in 1918 and 1919.

The emergence of the germ theory of disease that proved microorganisms cause infectious diseases, the development of microscopes to identify and study microorganisms, and the creation of effective vaccines changed the landscape of infectious disease practice within the past century. Dr. Keirns said that these advances evolved into a new emphasis on preventing infectious diseases. Items in the display such as a diphtheria kit (circa 1920s) and a vapo-cresolene lamp (circa 1880s) used to treat whooping cough and other throat ailments are instruments no longer in use.

The Hazards of the Job display shows what tools doctors used in trauma medicine before emergency rooms and EMT teams became a routine part of medical practice during the 20th Century. On Long Island, the workplace environment in the 1800s and part of the 1900s posed serious risk for injury in industries such ship building, maritime work, oystering and fishing, agriculture and manufacturing.

Accidents such as a fall from a horse-drawn wagon or a serious laceration to a limb at the work place often led to amputation. Dr. Keirns said that changing technologies, work patterns, and improved medical practices made loss of limbs and death from accidents much less common over time. An illustration of this progress is exhibited by a surgical saw that was used into the 1980s for amputations, in contrast with a 21st Century fixator that trauma surgeons at Stony Brook University Hospital routinely use to save limbs.

Some items in the displays indicate the similarities of certain medical practices decades ago to today’s practices. Objects like a reflex hammer (circa 1960s), Red Cross gauze (circa 1950s-60s), and a German made blood pressure kit from World War I are nearly the same or precursors of today’s instruments used in the delivery of care.